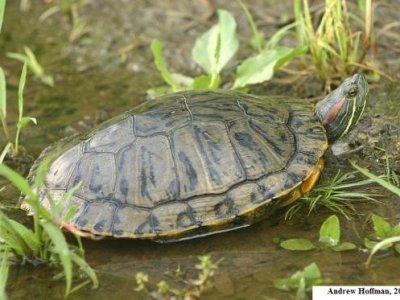 The carapace of the Pond Slider is smooth with a very low (or absent) vertebral keel and the posterior rim is weakly serrated. Carapace background coloration ranges from olive to brown and is marked with a variable pattern of yellow and black bands and stripes. The skin is olive to brown and patterned with thin yellowish stripes. Most individuals have a broad, prominent red, orange, or yellow band behind the eye; however some specimens lack this mark. The plastron is yellow and may be marked with a black blotch on each scute. Adults reach carapace lengths of 5 to 11 inches, with females reaching greater lengths than males. In addition to their smaller size, males may be differentiated by their thicker, longer tails, by the position of the vent relative to the carapace rim when the tail is extended (posterior to the rim; in females the vent is in line with or anterior to the carapace rim), and from their elongate fore claws. Some adults, particularly males, can display melanism, which causes an overall darkening of the turtle’s skin and shell, making positive identification more difficult. In very young Pond Sliders the carapace and skin are colored bright green and the black spots on the plastron are conspicuous. 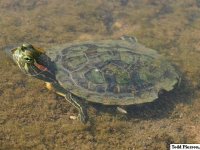 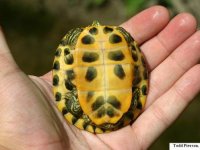 Map turtles (Northern, False, and Ouachita) lack the prominent, large, horizontal yellow, orange, or red band behind the eye. River Cooters also lack the prominent, large, horizontal band behind the eye (but the head is adorned with numerous thin yellow lines). River Cooters have a yellow to orange-ish bar in the center of each marginal scute, and on the undersurface of the marginals there may be a black spot positioned over each seam. The limbs and marginal scutes of Painted Turtles have red markings.

Found in most freshwater aquatic environments, Pond Sliders appear to prefer areas with an abundance of aquatic vegetation and a variety of objects for basking. Habitats may range from ditches to ponds and lakes, and streams and rivers with slow currents. These turtles are fond of basking and are often observed perched on emergent logs or other off shore structures. Pond Sliders are omnivores, and have been observed to eat algae and other aquatic plants, aquatic invertebrates (such as crayfish and snails), tadpoles and fish.

Pond Sliders have been widely collected for the pet trade industry, and have suffered population declines in some areas where this practice occurred. Unfortunately, pet trade in this species has resulted in the establishment of Pond Slider populations in areas outside of their native distribution (both domestically and internationally) via the release of unwanted animals. This turtle is also collected for use in the biological supply industry and for human consumption.

The range of the Pond Slider extends from southern Virginia south to northern Florida, west to eastern New Mexico and north as far as Kansas, southeastern Iowa, and northern Illinois and Indiana. Isolated populations are also found in California, Maryland, Ohio, Michigan, and in Ontario, Canada, however these are most likely a result of human introduction. Introduced populations are also found in Europe, Africa, Asia, and most recently in Australia. Across their Midwestern range Pond Sliders are considered relatively common.

Several subspecies of Pond Sliders are recognized; Indiana is home to the Red-Eared Slider (T. s. elegans). These turtles belong to the family Emydidae, which is represented in Indiana by a total of ten species. 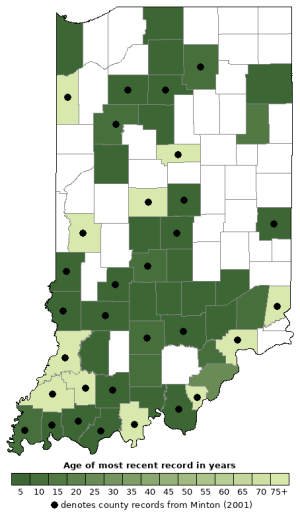 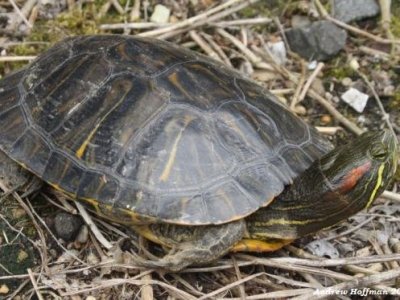 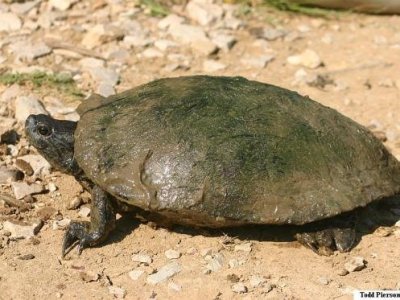 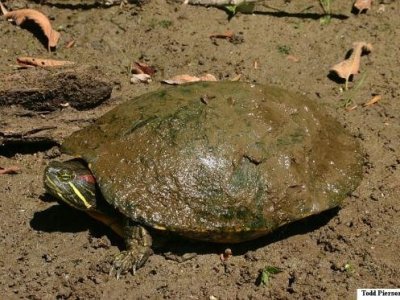 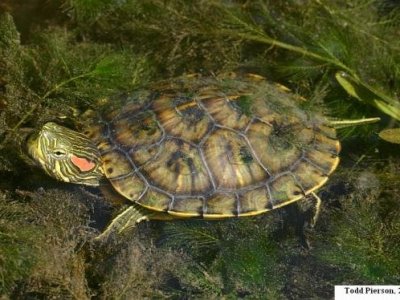 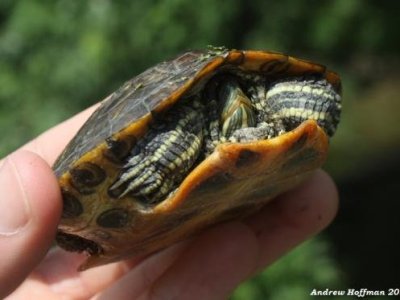