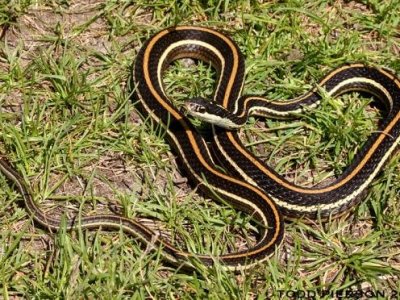 This colorful, striped snake is most easily identified by its bright orange dorsal stripe and long tail. Most snakes are dark brown to black in color with white to yellow lateral stripes and a white spot on top of the head. Though individuals may rarely exceed four feet (1.2 m), most adult western ribbonsnakes are one to two feet (40 - 70 cm) long. 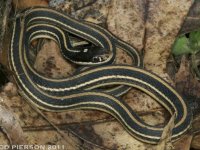 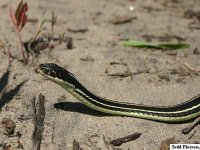 This snake's orange dorsal stripe and distinct white spot on the head (parietal spot) differentiate it from its close relative, the Eastern Ribbonsnake. Both Common Gartersnakes and Plains Gartersnakes have much shorter tails and are, overall, more robust.

Even though Western Ribbonsnakes are most commonly found in close proximity to water, they seem to prefer sandy or drier open areas associated more with brush than forest. The Western Ribbonsnake eats frogs, toads, salamanders, and small fish. It is listed as a species of Special Concern in Indiana and state Endangered in Illinois.

The Western Ribbonsnake ranges from Indiana, southern Wisconsin, and Illinois, south along the Mississippi River to the Gulf of Mexico, and west to parts of Texas, Oklahoma, and Nebraska. Western Ribbonsnakes are known from the northwestern corner of the state and from scattered, older records elsewhere.

Several subspecies of the Western Ribbonsnake (Thamnophis proximus) are recognized. Populations in Indiana are assignable to the Orange-Striped Ribbonsnake (T. p. proximus). These snakes are members of the family Colubridae, which is represented by a total of 28 species in Indiana. 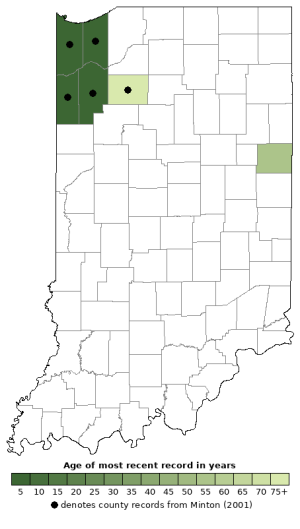 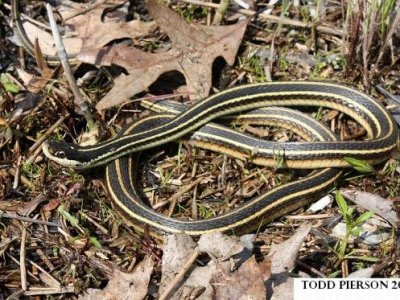