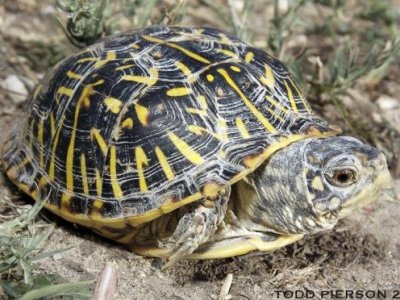 This small terrestrial turtle has a domed carapace and hinged plastron that allows it to retract fully inside of its shell. In contrast to other box turtle species, the top of the carapace of the Ornate Box Turtle is slightly flattened and unkeeled. The background color of the carapace is brown to black and each scute features a pattern of radiating yellow lines. The plastron is also strongly marked with yellow or white lines and streaks. The head is usually a dull green, yellowish or brown with dark spots. The species also sports enlarged scales on its forelimbs that can be red, orange or yellow. If you are interested in knowing the sex of an Ornate Box Turtle all you need do is look at their eyes. Males have a red iris, while in females the iris is light brown.

This terrestrial turtle lives on plains and prairies in sandy areas, and is able to withstand more arid conditions than other box turtles. When hot, Ornate Box Turtles will burrow into the ground to escape the heat. The species can be seen wandering between meadows and sparse woods, but as they generally prefer drier conditions, they will avoid wet habitats such as streams or marshes. Researchers have estimated that Ornate Box Turtles can live upward of 50 years.

In the Midwest, these turtles are State Endangered in Wisconsin and also in Indiana, where populations have decreased in sand prairies, in some cases to the point of extirpation. In Iowa they are considered State Threatened. Agriculture and other land use changes have greatly reduced Indiana populations of the Ornate Box Turtle. These turtles are uncommon in cultivated areas, and pesticides are suspected in contributing to population declines. Busy roadways, farm machinery, and lawnmowers are also causes for decreases in population numbers for this species

Ornate Box Turtles range across much of the south central United States from South Dakota to the north, southeastern Arizona to the west, southwest Indiana to the east, and south to southern Texas. Disjunct populations are also found in northwestern Indiana and adjacent northeastern Illinois, in southern Wisconsin, and in northwestern Illinois and adjacent eastern Iowa and Missouri. They are not found in Ohio, Michigan or Minnesota.

Some scientists recognize two subspecies of the Ornate Box Turtle (Terrapene carolina). Following that arrangement, Indiana's populations would be considered Plains Box Turtles (T. o. ornata). These turtles belong to the family Emydidae, which is represented in Indiana by a total of ten species. 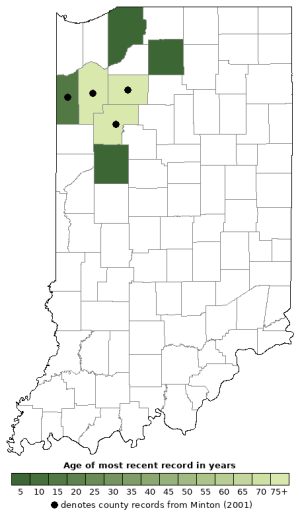