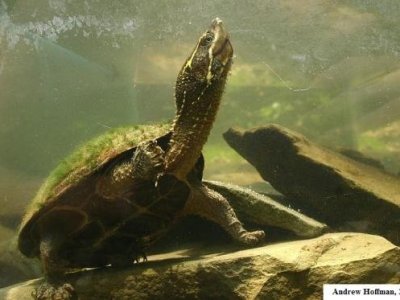 Stinkpots are small, brown or gray turtles with domed shells. They typically have two white or yellow stripes on their faces that run from the nose to the back of the head, although this coloration often fades with age. They have many "barbels" (fleshy protuberances) on the neck. Stinkpots have relatively reduced plastrons (bottom of shell) with one (anterior) hinge. Adult Stinkpots grow to a carapace length of approximately 6 in.

Juveniles are similar to adults, but have brighter markings and there are often knobs at the top of their carapace (top of shell). Typical clutch sizes are 2-5 eggs. Eggs are small and elliptical in shape, with a brittle white shell. 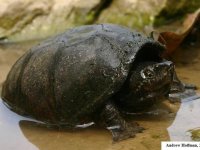 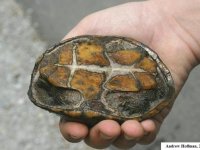 These turtles are often confused with Eastern Mud Turtles (Kinosternon subrubrum), but the latter has two plastral hinges and no obvious facial stripes. Stinkpots can also be confused with both snapping turtles, but the latter grows to much larger sizes, lacks facial stripes, and has a serrated back edge to its shell, pronounced ridges on the carapace, and a long spiny tail.

Stinkpots are extremely aquatic, and they can be found in many bodies of water. However, because they are so aquatic, they rarely inhabit temporary or ephemeral bodies of water. Typically, they live in lentic (non-flowing) bodies of water and are almost never found in fast-moving streams. Stinkpots are active from the early spring to late fall. They are omnivores, foraging on various small vertebrates, invertebrates, and detritus. These turtles are rarely found basking and are typically encountered swimming in the shallows of calm bodies of water. Mating can occur throughout the warmer months of the year in Indiana (but especially in the spring and fall), and nesting occurs between May and July.

Stinkpots occur in almost any still or slow-moving water, including ponds, lakes, sloughs, ditches, and slow streams. They prefer the shallow habitats around shorelines, where they can be seen foraging for prey. They occasionally bask on logs, and they are known for their surprisingly good climbing ability. Stinkpots are primarily carnivorous and consume a diet of aquatic insects, leeches, snails, crayfish, small fish, and tadpoles, but they also may eat algae and submergent vegetation. Occasionally, carrion is eaten. They forage in the shallows and seem to prefer insect larvae and snails. Stinkpots mate aquatically and lay their eggs on land near the water.

They usually bury them in decaying vegetation or loose soil, and they are known to nest in groups.

Like all other turtle species, the greatest threat to the Stinkpot is habitat loss and destruction. Shoreline development that results in the removal of aquatic vegetation and suitable nesting sites is a serious threat in many areas. Individuals may also be injured or killed from fishing and contact with boat propellers.

Stinkpots are abundant throughout much of its range which extends from Ontario, southern Quebec, and New England, south to Florida, and west to Texas. In Indiana, Stinkpots are common where appropriate habitat is found. Stinkpots are distributed across most of Indiana, although they have disappeared from much of the agricultural landscape.

The Stinkpot (Sternotherus odoratus) has no subspecies. It belongs to the family Kinosternidae, which is represented in Indiana by a total of two species. 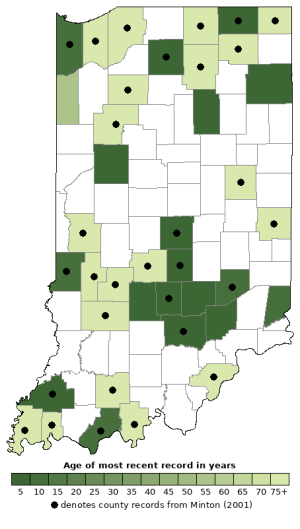 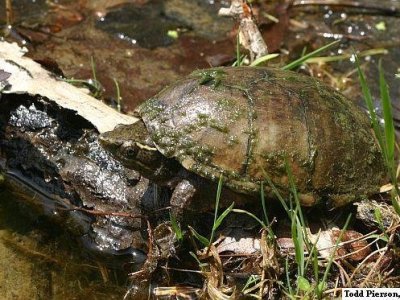 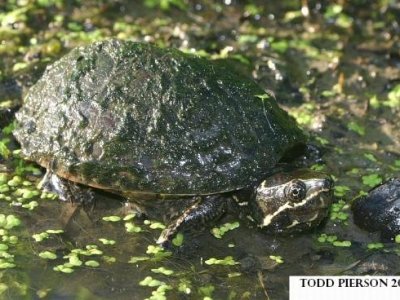 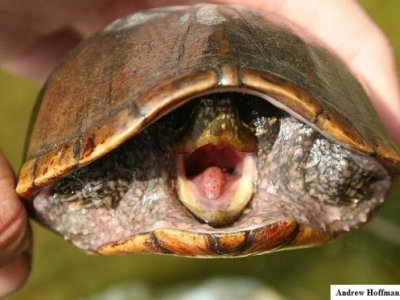 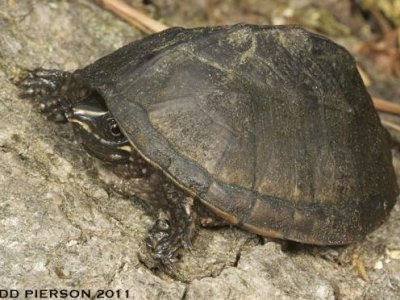