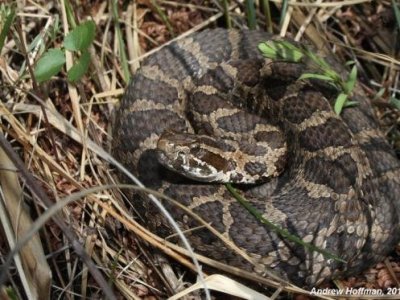 Indiana's smaller rattlesnake is rare and unlikely to be encountered outside of the few remaining fens and wetlands in northern Indiana where it persists. Eastern Massasaugas, though small, are relatively heavy-bodied and typically gray to light brown in color. They have dark brown blotches down the back and a broad, dark stripe along the side of the head and through the eye. Despite their name, this small rattlesnake's rattle is only audible in large adults and is relatively quiet, like a bumblebee trapped under a glass. Adult Eastern Massasaugas are small, rarely exceeding two feet (60 cm) in length. 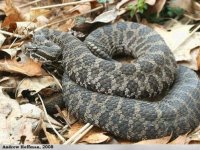 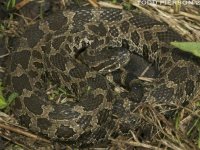 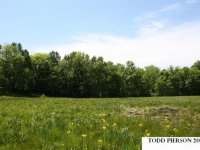 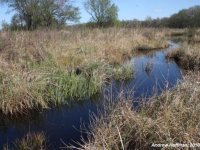 Eastern Massasaugas are found in grassy fens, wetlands, and remnant wet prairies of northern Indiana. Though they were once found throughout much of the northern half of the state and possibly further south, populations declined sharply following the extensive transformation of grasslands and wetlands in Indiana to agricultural land during the mid-1900's. They are now restricted to a few, scattered remnant populations in the northernmost part of the state and are apparently still declining. This trend of decline is not unique to Indiana and, as such, Eastern Massasaugas are now listed as federally threatened and are state endangered in Indiana.

Some scientists recognize one species and three subspecies of massasauga rattlesnake; others recognize two distinct species, one with two subspecies and the other with one. Regardless, Indiana's massasaugas belong to the species S. catenatus, and if the former system is subscribed to, they belong to the Eastern Massasauga (S. c. catenatus) subspecies. These snakes are members of the family Viperidae, which is represented by a total of four species in Indiana. 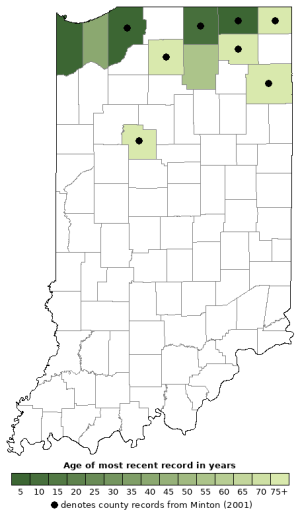 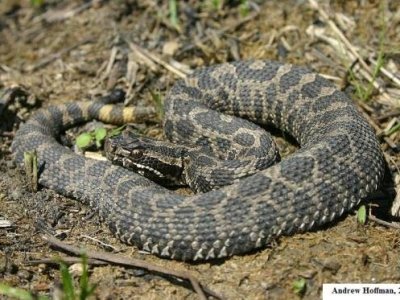