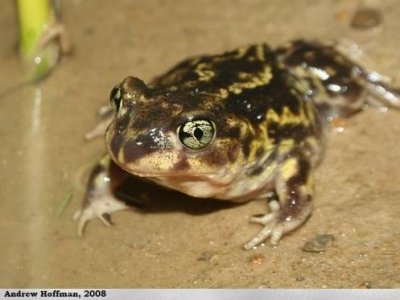 Adults of this species are stocky, brown or gray frogs with small dorsal warts. Individuals often have yellow stripes extending posterior to the eye. The underbelly is white to gray in coloration. Eastern Spadefoots' pupils are vertical ellipses which distinguishes them from other "toads" in Indiana (Eastern Spadefoots are often referred to as toads, but are taxonomically distinct from true toads). Eastern Spadefoots have dark, calcified tubercles ("spades") on their hind feet from which they derive their name. Adult Eastern Spadefoots grow to around 2 in (50 mm) total length.

Female Eastern Spadefoots lay eggs in long bands up to a foot in length. The tadpoles are small and speckled with orange, and the tailfin is clear. The larval stage in this species is very abbreviated. 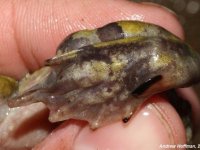 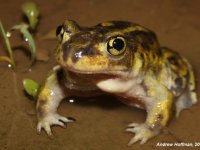 The body form and coloration of this anuran make it quite distinct from the other frogs and toads in Indiana. Eastern Spadefoots are the only anurans in Indiana with elliptical pupils.

Eastern Spadefoots have a loud nasal call that resembles the "whank" call of a young crow. Listen to the call courtesy of the Indiana DNR.

This species is found in areas with well-drained soil; usually low, sandy areas and often in the secondary floodplain of large rivers. Eastern Spadefoots have also been found in low, open areas with loose soil in the absence of sand. In Indiana, Eastern Spadefoots appear to tolerate a wide range of habitat modification and may be abundant in and around low farm fields as well as in suburban neighborhoods. In the past, these areas were probably a mosaic of mature bottomland forests and sand prairies. During the short period of time when breeding occurs, Eastern Spadefoots may be found at night in large numbers crossing roads or actively moving around in yards and fields. Eastern Spadefoots use the calcified "spades" on their hind feet to dig downward from a sitting position. In loose soil, they can dig down and conceal themselves within seconds. Eastern Spadefoots are burrowers and are typically seen only when they are above ground during major breeding events. Juveniles, and occasionally adults, may be active on rainy summer nights, presumably foraging. Eastern Spadefoots occasionally turn up in window wells and in suburban yards following wet weather. Eastern Spadefoots feed on a wide variety of invertebrates, but they have a preference for larval lepidopterans (moth and butterfly caterpillars) and, to a lesser extent, ground-dwelling beetles. 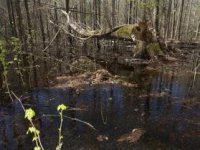 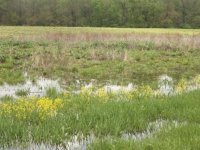 Since Eastern Spadefoot breeding is explosive, the timing of breeding varies substantially with annual weather patterns. Over the course of one or two nights after heavy rains, large numbers of these frogs emerge from the ground and gather at temporary pools where breeding takes place. After hatching, the tadpoles must develop and transform in a short period of time as the pools used for breeding will dry rapidly. Reproductive success appears to be sporadic with some years resulting in no recruitment of juveniles and others resulting in thousands of juveniles emerging from a single pool. Eastern Spadefoots may reproduce anytime from March to July following heavy rains. Breeding congregations are associated with substantial rain events and breeding may not take place in dry years. Conversely, multiple breeding events may occur in a single season during wet years. The eggs hatch shortly after deposition and the young transform and disperse within a week or two of hatching.

It is difficult to assess the long term stability of Eastern Spadefoot populations because of their erratic breeding. Their use of disturbed sites including flooded areas in cultivated fields and suburban lawns suggests that Eastern Spadefoots may have a higher tolerance for habitat disturbance than other anuran species. However, a study in Florida found that Eastern Spadefoots were unable to burrow into grass sod, and had difficulty burrowing into gravelly or heavily saturated soils. The study concluded that Eastern Spadefoots were unlikely to adapt well to rapidly urbanizing environments. In Indiana, surveys have been conducted to monitor known populations and find new breeding sites. This species was formerly considered a species of Special Concern in Indiana, but has since been delisted due to the discovery of many new populations in recent years.

Eastern Spadefoots occur through the southeastern United States, north into New England along the East Coast. Their distribution in the Midwest is patchy with isolated populations occurring in suitable habitat.

Due to their explosive and irregular breeding patterns, undocumented Eastern Spadefoot populations are still to be discovered in Indiana. Formerly, this species was known from only a handful of scattered populations in southern half of the state, but recent records indicate that Indiana Eastern Spadefoot populations are tied to floodplain habitat along the White, Wabash, and Ohio Rivers in southern and western Indiana. Eastern Spadefoots occur from Posey County along the Wabash River to Terre Haute (Vigo County) and north into extreme southern Parke County. Along the White River, they are found from Knox and Gibson Counties into Bartholomew County just south of Columbus (East Fork) and northward into Owen County (West Fork). Eastern Spadefoots are known from a few sites along the Ohio River from Posey County to Floyd County. Here they breed in typical flooded low areas, but also in atypical habitats in the karst plains such as sinkholes and relict barrens.

The are no currently recognized subspecies of the Eastern Spadefoot (Scaphiopus holbrookii). These frogs are members of the family Scaphiopodidae, and although they are colloquially called "toads", they share no close relationship with the "true toads" of the family Bufonidae. 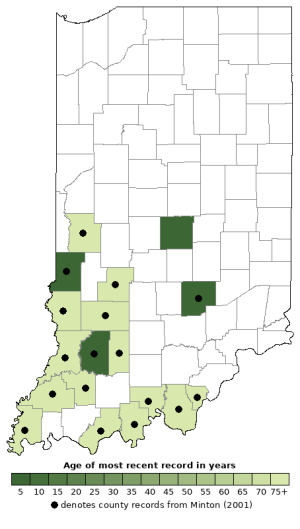 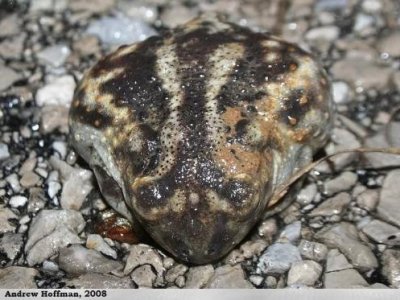 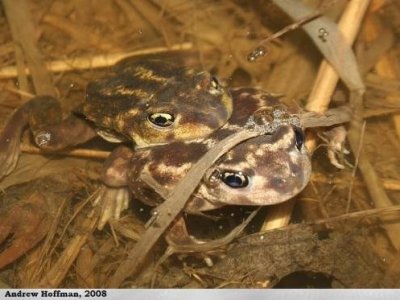 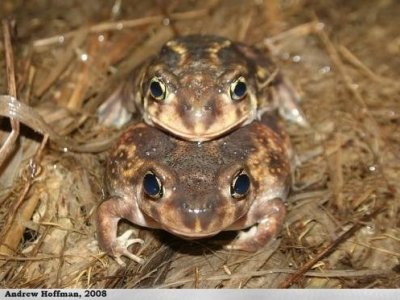 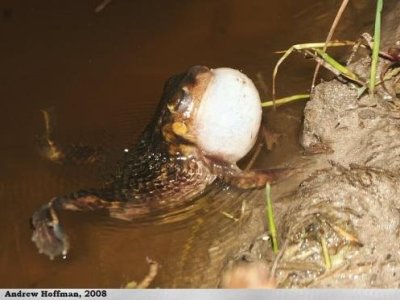 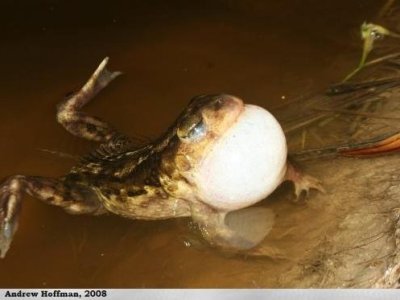 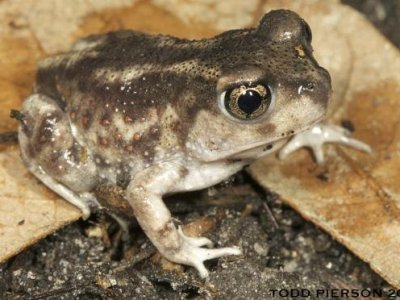 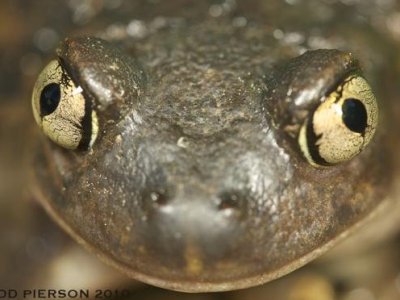 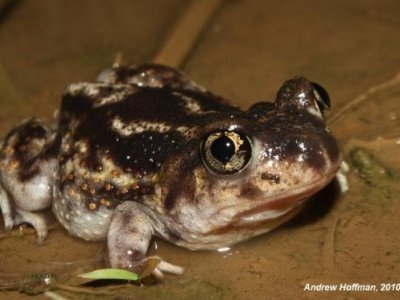 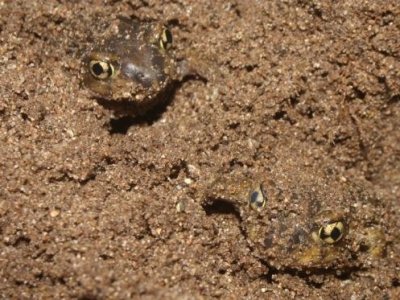 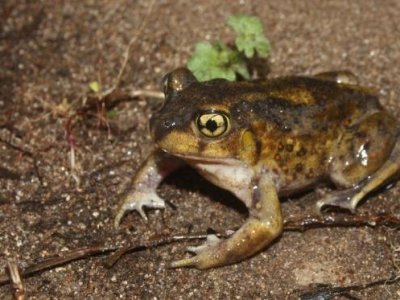 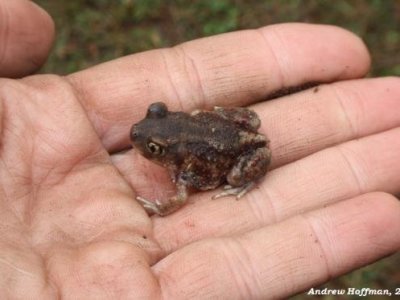