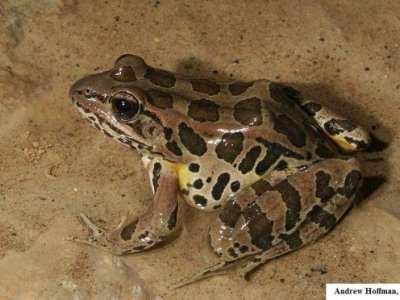 Adults are medium-sized, olive brown frogs with large rectangular dorsal blotches. The blotches are neatly arranged in rows of two between the dorsolateral ridges. The underbelly of this frog is plain white in color and the legs are banded. Dorsolateral folds are present and are usually light orange or yellow. Pickerel Frogs have a bright yellow wash around the groin region (similar to the Gray Treefrog species complex). Pickerel Frogs grow to around 3 in (50-70 mm) long. 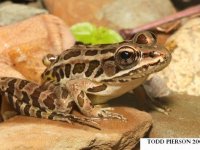 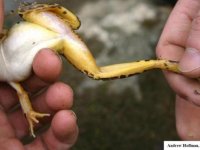 Females lay their eggs in globular masses of 3,000 or fewer eggs. A large brownish tadpole that usually grows to around 3 in (60 mm) in length. The tailfin is heavily mottled.

In Indiana, this is a species of cool-clear, often spring-fed riparian environs. Pickerel Frogs are often found in caves and springs in southern Indiana and they are also associated with clean flowing streams and shaded ravines. This species is the only North American frog known to routinely use caves in large numbers for hibernation. They are often found under rocks and logs near the water's edge, but can also be found crossing roads on rainy nights or actively moving around in or just outside of caves. Pickerel Frogs may be encountered in rock crevices in caves and along moist rock faces. Pickerel Frogs are most active from March to October but may also be active on mild days during the winter in and around caves. Pickerel Frogs feed on a variety of terrestrial invertebrates. 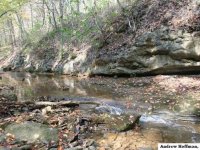 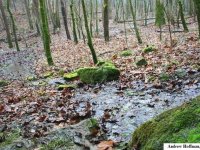 In Indiana, Pickerel Frogs breed primarily in upland, ephemeral wetlands. It has also been suggested that they may breed in cave pools in some locations (based on calling heard from inside caves). Pickerel Frogs breed during April in most of Indiana though they may call during late March in southern Indiana when conditions are mild. After being deposited, the eggs hatch in a little over a week and the larvae transform during June or July.

Pickerel Frogs are abundant where karst topography is present, but elsewhere are more localized. Few threats are known to Indiana populations, but a Missouri study found that Pickerel Frogs avoided areas where invasive Amur honeysuckle bushes were dense (this is a common invasive plant in Indiana). Despite being most often associated with forests in Indiana, Pickerel Frogs do not appear to respond negatively to clear-cutting and other timber harvesting practices.

The Pickerel Frog is found through the eastern United States and parts of southern Canada; east from Texas in the south and Minnesota in the north. Pickerel Frogs are common in the creeks and springs of southeastern, west-central, and south-central Indiana. They have a patchy distribution in northern Indiana and are likely absent from much of central Indiana.

There are no recognized subspecies of the Pickerel Frog (Rana palustris). Frost et al. (2006) recommended placing these frogs in the genus Lithobates, but other authors argue against this, instead suggesting the recognition of subgenera within the monophyletic Rana (e.g., Pauley et al. 2009; Yuan et al. 2016). Pickerel Frogs belong to the family Ranidae, which is diverse and widespread worldwide and includes eight species of frogs in Indiana.

Pickerel Frogs are known to have mildly toxic skin secretions which make them unpalatable to some predators. This is not a serious concern for humans, but it is always best to wash your hands after handling this species (and other amphibians) and try to avoid housing Pickerel Frogs with other animals in captivity. 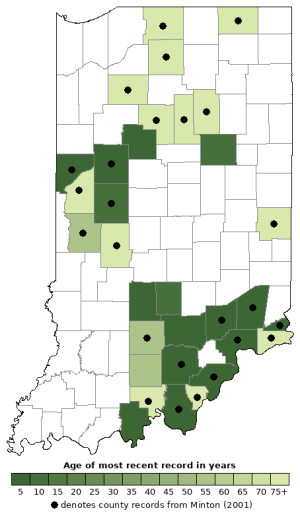 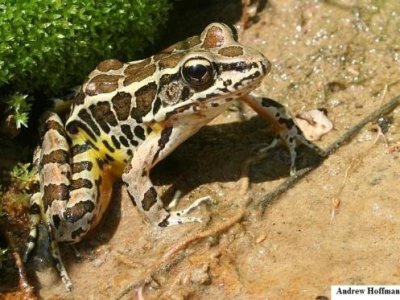 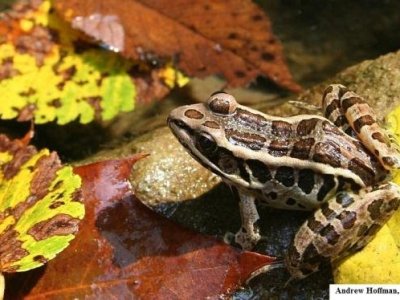 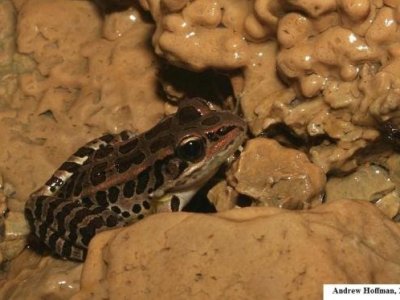 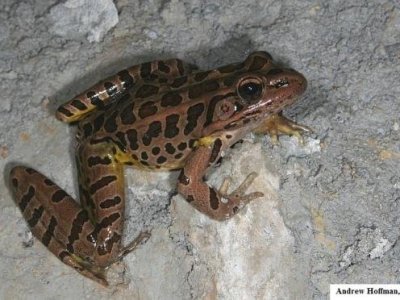 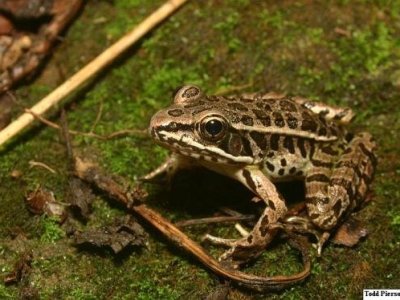 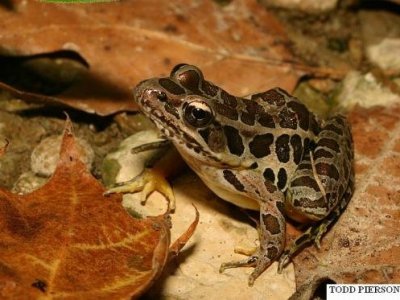 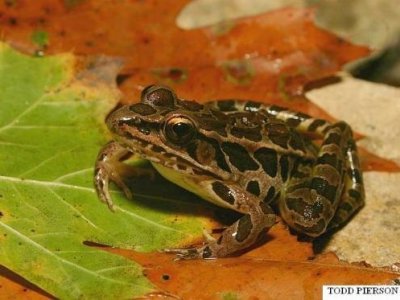 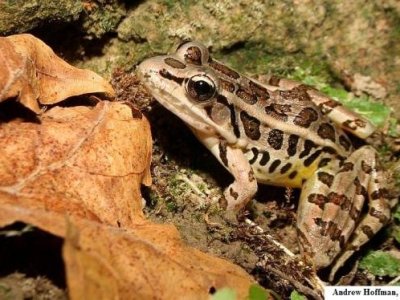 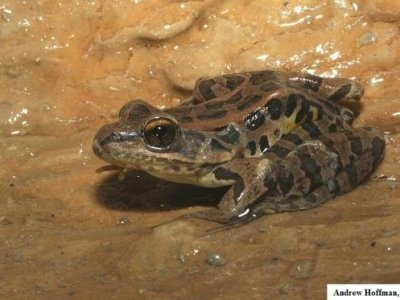 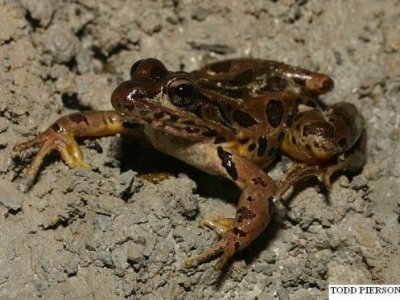 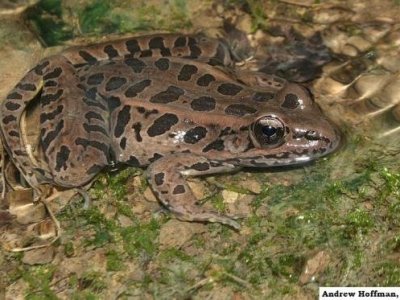 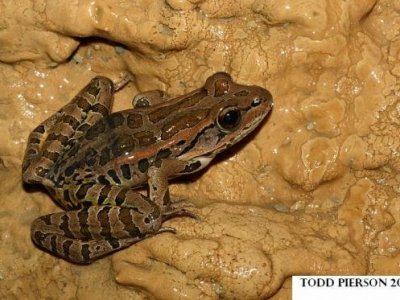 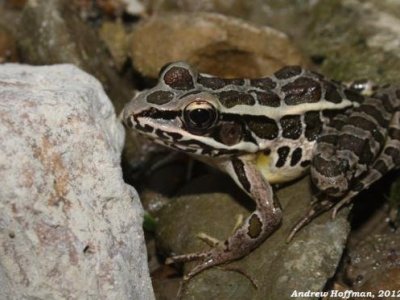 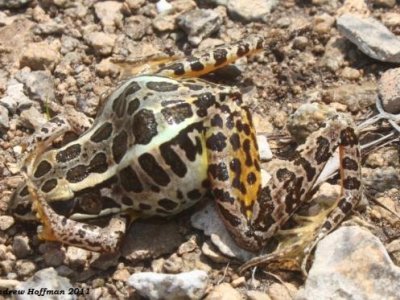 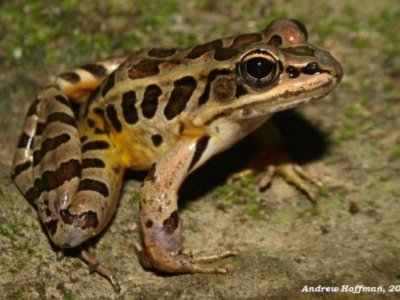 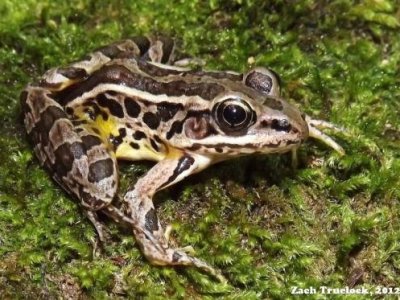 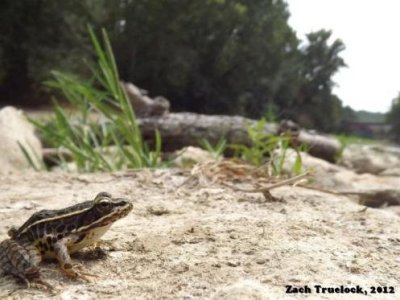 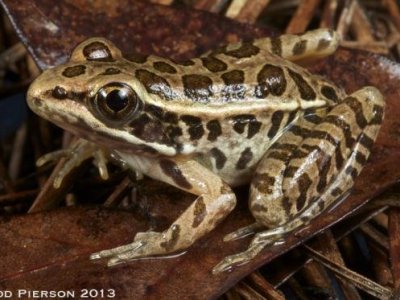 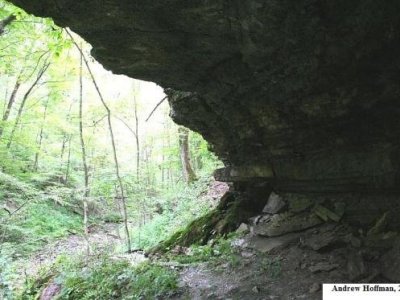 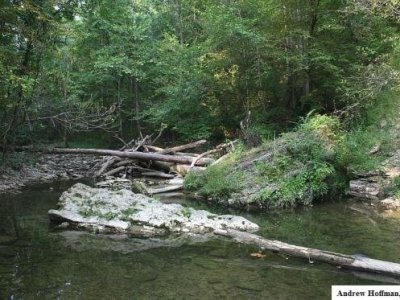 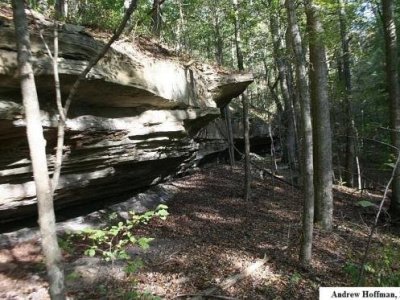 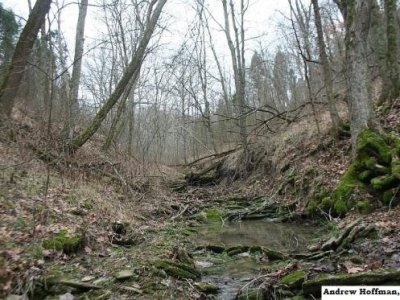