Adult American Bullfrogs are large, green to brown frogs with no dorsolateral ridge. Dorsal coloration varies from dark brown to uniform green and ventral coloration is lighter with gray mottling. The throat of breeding males is usually bright yellow. The tympanum of males is quite large, while that of females is closer to eye-size. This species is the largest frog in North America with adults reaching lengths of 6-8 in, though most adults are 4-5 in (95-145 mm) in length.

American Bullfrogs have a deep, resonating call, which is often repeated in several minute intervals. Its call is described phonetically by many as "jug-o-rum." Listen to the call courtesy of the Indiana DNR.

American Bullfrogs inhabit a wide array of aquatic situations, though permanent water is necessary for breeding. They prefer slow or still warm water and are often found in swamps, slow rivers, ponds, and lakes. During the spring, American Bullfrogs spend a considerable amount of time in and around ephemeral wetlands where they feed heavily on aquatic invertebrates and other breeding amphibians. They are seen throughout the summer sitting out along the shoreline of ponds and slow portions of rivers both day and night. When approached, American Bullfrogs will dive into the water and disappear, often under leaf litter or into vegetation. Though large bodies of water seem to be their preferred habitat, American Bullfrogs are also commonly found in small, rocky streams (especially juveniles). American Bullfrogs are active year round in southern Indiana, though they are generally inactive during cold weather. They are most active during their summer breeding season. American Bullfrogs are voracious predators and will eat anything smaller than their mouth. Insects and crayfish make up a large part of the diet, though vertebrates like other frogs, tadpoles, small turtles, snakes, and small mammals are also eaten. 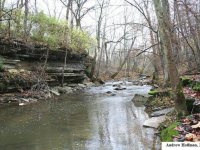 American Bullfrogs breed in shallow, warm, vegetated waters and have a prolonged summer breeding season during which the males are highly territorial. Male American Bullfrogs defend small sections of the wetlands they breed in by vocalizing and aggressively chasing out intruders. The males are able to differentiate between the call of a neighbor and the call of an intruder and respond accordingly. They breed exclusively in permanent water because larval development takes one to three years. American Bullfrogs are well adapted for breeding in wetlands inhabited by fish and their larvae are apparently distasteful and possibly toxic to some fish species. Unlike most other amphibians, American Bullfrogs are tolerant of polluted waters and will readily breed in urban ponds, lakes, and drainages. This species breeds in Indiana from late May to early August and can be heard calling both day and night. Unlike spring breeding frogs, this species rarely exhibits concentrated, breeding congregations and can instead be heard calling almost any time during the summer both day and night.

These frogs are abundant throughout the state, tolerating polluted waters and readily colonizing manmade ponds. They are considered a game species in Indiana and are harvested for their legs. This localized harvest pressure likely has little effect on populations. In some cases, these large, aggressive frogs may exclude or compete with other anurans. American Bullfrogs have also been documented as carriers of both Batrachochytrium dendrobatidis (chytrid fungus) and Ranavirus though in most cases they seem to be generally unaffected by the diseases. Between their potential as disease vectors, their aggressive predatory habits, and their tendency to utilize a wide range of aquatic habitats; the American Bullfrog is a devastating invasive species outside its native range and should never be released into an area it is not known to occur in. American Bullfrogs are also known to feed on fish in hatchery ponds. The larvae in these ponds may be able to metamorphose within their first year fed on a diet of fish food.

There are no currently recognized subspecies of the American Bullfrogs (Rana catesbeiana). Frost et al. (2006) recommended placing these frogs in the genus Lithobates, but other authors argue against this, instead suggesting the recognition of subgenera within the monophyletic Rana (e.g., Pauley et al. 2009; Yuan et al. 2016). American Bullfrogs belong to the family Ranidae, which is diverse and widespread worldwide and includes eight species of frogs in Indiana.

Kruse, K. C. and M. G. Francis. 1977. A Predation Deterrent in Larvae of the Bullfrog, Rana catesbeiana. Transactions of the American Fisheries Society 106:248-252.