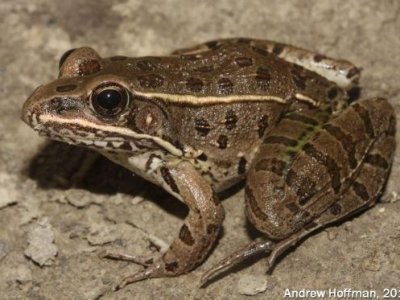 This non-descript frog is found peripherally in Indiana and is known from only a handful of sites. Like their more widespread counterparts, adult Plains Leopard Frogs have dark, irregular dorsal blotches. In this species, the spots have no light borders and there is usually a spot on the snout. The key in distinguishing this species from the more common leopard frog species in Indiana is that the dorsolateral folds are broken and inset posteriorly. The tympanum has an obvious light center and a distinct line along the upper jaw is present (as it is in other leopard frogs). Plains Leopard Frogs grow to around 2 in (45-65 cm) long. 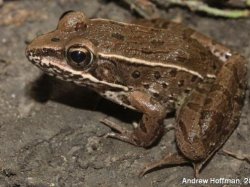 Plains Leopard Frogs deposit globular egg masses in shallow water, similar to Indiana's other leopard frog species. Larvae are also similar to other species, but more slender and rounded with a noticeably more subterminal mouth than the larvae of the Northern Leopard Frog (L. pipiens). They grow to approximately 2 in (~60 mm) in length. 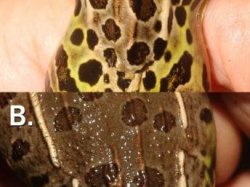 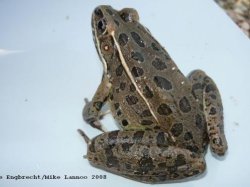 The call of this species has been described as a "chuck-chuck-chuck", lasting about a second.

Listen to the call courtesy of Indiana DNR.

In other states, Plains Leopard Frogs are found in association with open habitats such as old fields, grassland, marshes, and along the margins of highways and agricultural areas. They apparently avoid forested areas and are scarce in and around plowed fields. They require wetlands or ponds in which to breed and are rarely found far from water. Morphological evidence suggests that this species is more adapted for breeding in streams than the other leopard frogs in the state and most Indiana records come from stream and river margins or floodplains. Historically, this species was almost certainly a prairie inhabitant, but has adapted to more disturbed environs following the loss of most native prairie habitat. Plains Leopard Frogs breed from March to May in still water. They begin to breed with the first warm, spring rains. While they may be found near streams, they are primarily a wetland breeder and will utilize marshes, ponds, and low flooded areas. During their active season, they prey on crickets and earthworms, among other invertebrates.

Because records for Plains Leopard Frogs are few and scattered in Indiana, virtually nothing is known about its conservation status. This frog may have experienced population declines associated with the loss of Indiana's native grasslands, however, since Indiana lies on the eastern periphery of the species' range it is possible that the frog was never a common resident in the state. In Indiana, it is sympatric with other leopard frog species and will occasionally hybridize with them. Plains Leopard Frogs are considered a state endangered species in Indiana due to a scarcity of records.

This frog is a species of the Great Plains and occurs throughout the central United States. They are found from New Mexico and Texas, north into South Dakota and east into Illinois and the western half of Indiana. The range of this species in Indiana is not well-understood. There are only a few records scattered along the western (primarily northwestern) part of the state with the exception of a single Tipton County record. The range of this frog coincides roughly with the eastern extent of the prairie peninsula which reached its easternmost limit in northwestern Indiana. Where they have been found in Indiana, Plains Leopard Frogs occur alongside either northern or Southern Leopard Frogs which may partially account for its lack of documentation in the state. The only recent records for this species are from Vigo and Newton Counties. In Vigo County, the frogs are sympatric with Southern Leopard Frogs while they are sympatric with Northern Leopard Frogs in Newton County. 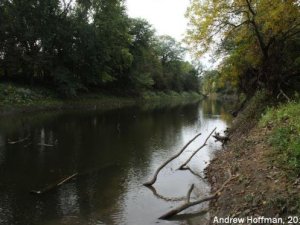 There are no recognized subspecies of the Plains Leopard Frog (Rana blairi). Frost et al. (2006) recommended placing these frogs in the genus Lithobates, but other authors argue against this, instead suggesting the recognition of subgenera within the monophyletic Rana (e.g., Pauley et al. 2009; Yuan et al. 2016). Plains Leopard Frogs belong to the family Ranidae, which is diverse and widespread worldwide and includes eight species of frogs in Indiana. 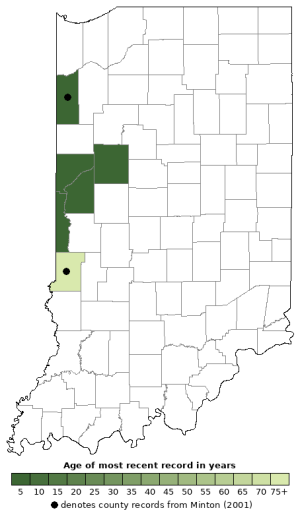