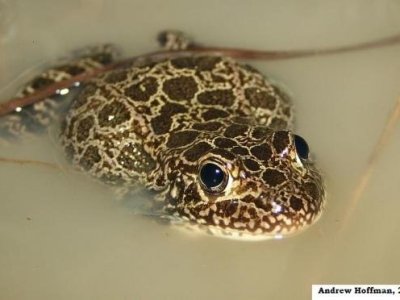 This large, distinctive frog is rare in Indiana, and is more likely to be heard than seen. Adult Crawfish Frogs are tan to cream-colored with dark, greenish-brown dorsal blotches outlined in white. The underbelly and throat are white and the legs are mottled with brown and white. They are stocky and have a relatively broad head with dorsally positioned eyes and nostrils. This is the second largest frog in Indiana and adults may grow up to 4 inches (7-11 cm) in length (Minton 2001). 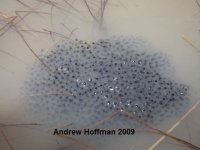 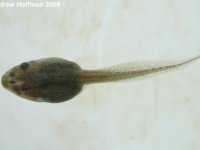 Females deposit eggs in large, spherical masses of 3,000 to 7,000 eggs (Minton 2001). Tadpoles are rather nondescript with few distinctive markings (Smith et al. 1948). Parris and Redmer (2005) report a maximum larval size of 63 mm (2.5 in) and a snout-vent length at metamorphosis of 30 mm (1 in). Larvae are smaller than those of American Bullfrogs (Rana catesbeianus) and similar in size to Green Frog tadpoles (R. clamitans).

The large size and distinctive patterning of Crawfish Frogs makes them difficult to confuse with any other Indiana frog. Leopard Frogs (Plains, Northern, and Southern) and Pickerel Frogs also have dorsal spots, but are smaller, more slender, and have more pointed snouts.

Crawfish Frogs have a low frequency, drawn out snore that starts soft and rises in pitch, falling off at the end. This resonant call occurs at irregular intervals and can be heard for up to two miles under ideal conditions.

Listen to the call courtesy of the Indiana DNR.

Crawfish Frogs inhabit prairies, grasslands, and pastures (Busby and Brecheisen 1997, Minton 2001) where upland burrowing crayfish burrows are prevalent. They are obligate burrow dwellers that spend most of their lives in association with crayfish burrows (Hoffman et al. 2010, Heemeyer and Lannoo 2012, Heemeyer et al. 2012). The burrows, which can reach over a meter in depth, allow access to the water table, and serve as a refuge during high and low temperature extremes. Crawfish Frogs are active year round and have been observed every month of the year. They are often active for extended periods of time, sitting at the burrow entrance where they feed. This above ground activity is more common at night during late summer. These frogs are ambush predators, preying on passing invertebrates. Insects (predominately beetles), millipedes, and centipedes (Crawford et al. 2009). Feeding takes place from the burrow entrance where frogs ambush passing prey.

In Indiana, Crawfish Frogs breed in shallow, seasonal pools in grasslands, pastures, and old fields. At Big Oaks National Wildlife Refuge, they also breed in old craters left from the testing of military explosives that have since filled with water. Crawfish Frogs typically emerge during March or April when nighttime temperatures reach the mid-50s (F) and there is significant rainfall (Minton 2001, Heemeyer and Lannoo 2012). During most years, breeding activity is restricted to one or two weeks, although chorusing can be cut short by a cold front. Eggs are deposited in shallow water, and hatching occurs within two weeks. Larvae metamorphose in June and July (Kinney 2011). Females deposit eggs in shallow, vegetated water. Crawfish Frogs avoid breeding in wetlands where predatory fish are present, though they may inhabit wetlands with fish that are too small to prey on their larvae. They are also impacted by other amphibians such as newts (Notophthalmus viridescens) and marbled salamander larvae (Ambystoma opacum) which feed on their eggs and larvae. Bullfrogs may act as both predators and competitors.

If current trends continue, Crawfish Frogs could be extirpated from Indiana within 50 yrs (Engbrecht et al. 2013). Nearly all of Indiana's native grasslands have been replaced by agricultural land and this has undoubtedly been a driving factor in the decline of this species. However, Crawfish Frogs have disappeared from some sites without any apparent changes to the habitat. Crawfish Frog larvae are poor competitors with other anuran larvae (Parris and Semlitsch 1998) and they are heavily preyed on by fish. This, coupled with their ability to quickly colonize newly created ponds and recently burned grasslands (Engbrecht and Lannoo 2012) may be indicative of this species' need for early successional wetland habitat for breeding. Historically, the activity of large mammals such as bison and elk may have created new wallows and shallow swales annually that could have served as breeding sites. Yearly surveys are conducted for this species throughout its Indiana range by state and university researchers. A large scale research project involving Indiana State University, Indiana University School of Medicine, Hanover College, and Big Oaks National Wildlife Refuge has recently been undertaken to better understand the range, reproductive success, movement patterns, habitat use, and behavior of Crawfish Frogs in Indiana. We now have a better understanding of the ecology of this rapidly declining frog and, as a result, conservation initiatives such as habitat restoration and repatriation are underway. Due to drastic population declines and an overall range reduction, Crawfish Frogs are a state endangered species in Indiana and are near threatened globally.

Crawfish Frogs have an irregular distribution through the prairies of the central United States from Indiana to Kansas; south into Texas, Louisiana, and Mississippi (Conant and Collins 1998). They have declined throughout their range due largely to habitat loss and degradation (Engbrecht and Lannoo 2010, IUCN 2013). Crawfish Frogs occur in southwestern Indiana where pocket prairies once dotted much of the landscape (Transeau 1935). They are restricted to areas south of the Kankakee Sands and are absent from the bottomland floodplains of southwestern Indiana. Most of Indiana's native grasslands have been lost, and remaining Crawfish Frog populations are widely dispersed and isolated. However, Crawfish Frogs are able to colonize areas where grassland habitat has been restored, and now occur on some reclaimed coal mine grasslands (Minton 2001, Engbrecht and Lannoo 2010, Engbrecht et al. 2013). Crawfish Frogs are also found at Big Oaks National Wildlife Refuge in southeastern Indiana in parts of Jefferson, Jennings, and Ripley counties. It is not known whether this population is native or introduced, but the frogs occur at numerous sites throughout the refuge. Despite extensive surveys, breeding populations are not known outside of the refuge in this part of the state (Engbrecht and Lannoo 2010). 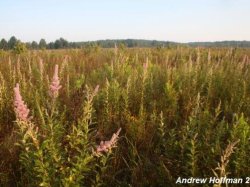 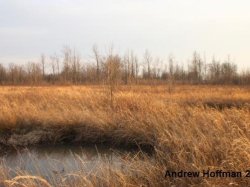 Only species of Crawfish Frog--the Northern Crawfish Frog (Rana areolatus circulosus) is found in Indiana. Frost et al. (2006) recommended placing these frogs in the genus Lithobates, but other authors argue against this, instead suggesting the recognition of subgenera within the monophyletic Rana (e.g., Pauley et al. 2009; Yuan et al. 2016). Crawfish Frogs belong to the family Ranidae, which is diverse and widespread worldwide and includes eight species of frogs in Indiana.

Crawford, J. A., D. B. Shepard, and C. A. Conner. 2009. Diet Composition and Overlap between Recently Metamorphosed Rana areolata and Rana sphenocephala: Implications for a Frog of Conservation Concern. Copeia 2009:642–646.

Engbrecht, N. J. and M. J. Lannoo. 2010. A Review of the Status and Distribution of Crawfish Frogs (Lithobates areolatus) in Indiana. Proceedings of the Indiana Academy of Sciences 119:64–73.

Engbrecht, N. J., P. J. Williams, J. R. Robb, D. R. Karns, M. J. Lodato, T. A. Gerardot, and M. J. Lannoo. 2013. Is There Hope for the Hoosier Frog? An Update on the Status of Crawfish Frogs (Lithobates areolatus) in Indiana, with Recommendations for their Conservation. Proceedings of the Indiana Academy of Science 121:147–157. 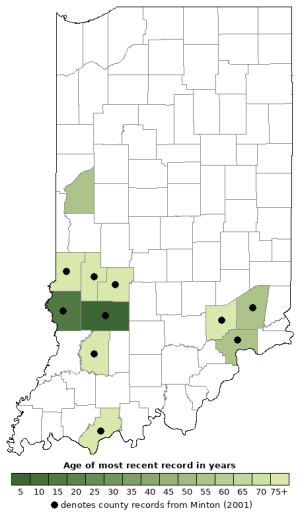 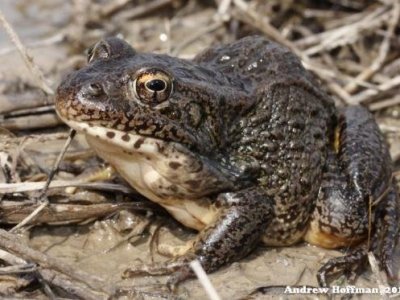 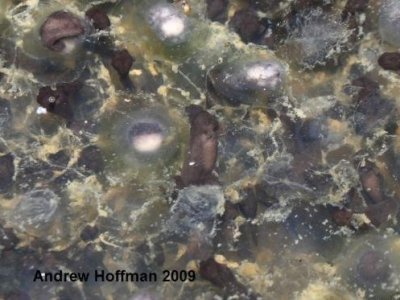 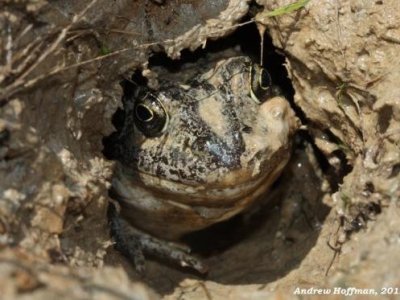 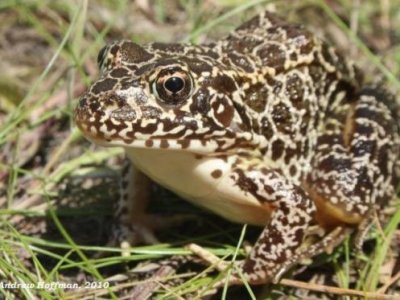 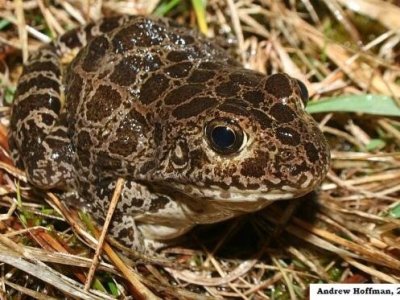 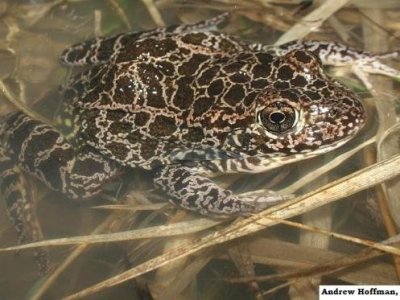 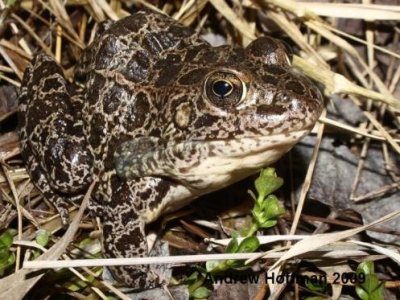 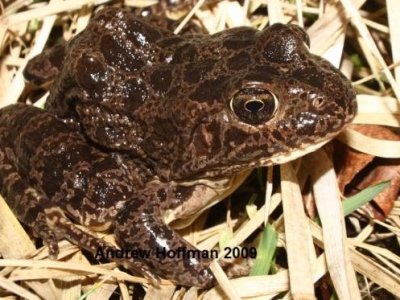 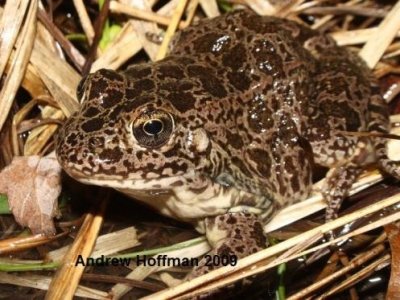 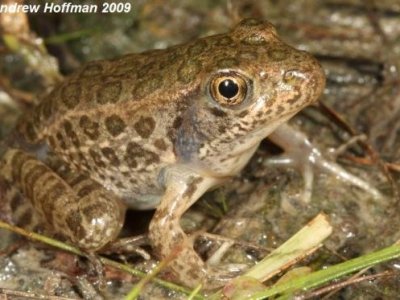 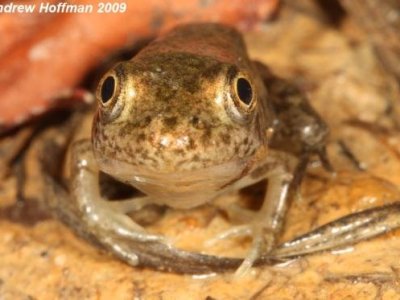 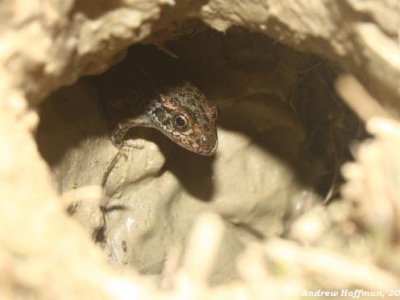