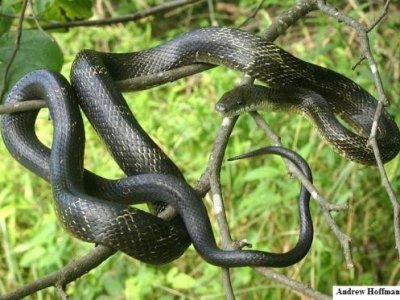 This is probably the most widely known and familiar of Indiana's "black snakes", despite the fact that most individuals are not uniformly black. Juveniles are light gray with black bands and this pattern is retained, though most often heavily obscured, in adults. With age, Gray Ratsnakes become darker with some individuals turning almost entirely black. Most Gray Ratsnakes have stippled light coloration, marking the faint remnants of their juvenile banding, that may be white, yellow, orange, or even reddish. These snakes also have a distinctive "bread loaf" body that is domed on top and flat on the bottom. Perhaps the most distinctive thing about this species is that it is Indiana's longest snake with adults commonly reaching lengths of six feet (1.8 m) and some individuals recorded at over eight feet (2.5 m) long! 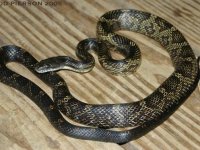 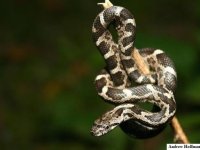 Though Eastern Hog-Nosed Snakes and Common Gartersnakes are sometimes entirely black, this species is most often mistaken for the two other "black snakes" in Indiana: Eastern Racer and Black Kingsnake. Both of these species have smoother, glossy scales and less extensive patterning as adults. Adult racers are uniformly black, blue or gray whereas Black Kingsnakes have scattered white speckling. Juvenile Gray Ratsnakes are very similar to juvenile [nerodia_sipedon|Northern Watersnake]], but have much weaker keels on each scale and have a dark bar connecting the eyes. Of all aforementioned species, Gray Ratsnakes are the only one likely to be found climbing in trees or scaling buildings; with the exception of racers which occasionally climb into low shrubs.

Gray Ratsnakes are found throughout Indiana, but are absent from the sand prairies of northwestern Indiana. This is one of the most characteristic species of eastern forests and it is ubiquitous throughout the state. This is also the most arboreal snake in the state and spends much of its time in hollow trees and climbing through forest canopies. Despite this proclivity for climbing, they are commonly found in old fields and around barns and junkyards, where they seek shelter and food (rodents) under sheet metal, boards, and even in old pieces of furniture.

The taxonomic history of ratsnakes is contentious and complicated. For many years, North American ratsnakes were placed in the genus Elaphe, but Utiger et al. (2002) demonstrated this genus to be paraphyletic and recognized the genus Pantherophis to remedy the situation. Burbrink et al. (2000) and Burbrink (2001) suggested that what was once considered a single, wide-ranging species of ratsnake in the eastern United States was likely multiple species. The legacy of these two studies is that many herpetologists now recognize Indiana's ratsnakes as Gray Ratsnakes (Pantherophis spiloides), although there is not unanimous support for this taxonomy. Finally, Collins and Taggart (2008) proposed the return to the use of the genus Scotophis for these snakes, but few herpetologists support this recommendation. These snakes are members of the family Colubridae, which is represented by a total of 28 species in Indiana. 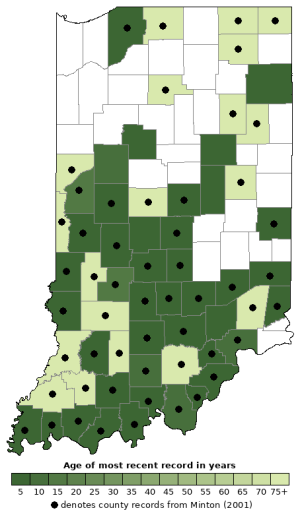 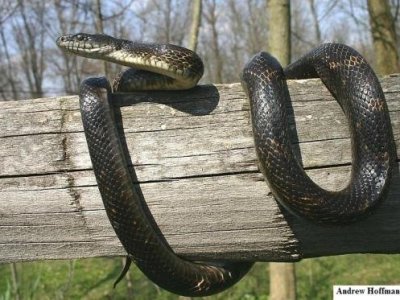 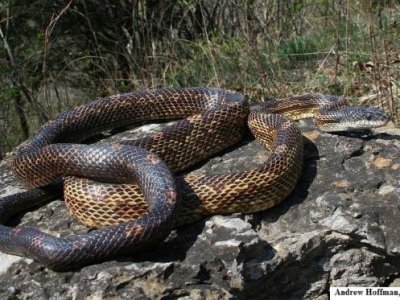 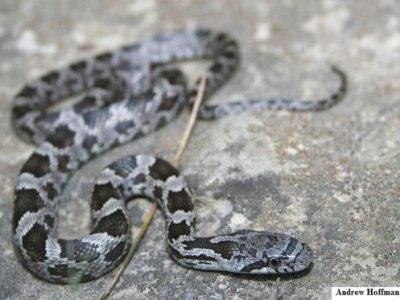 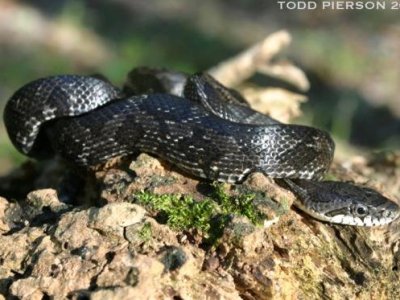 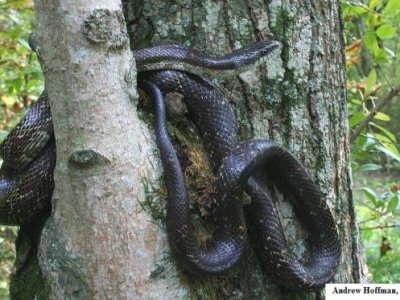 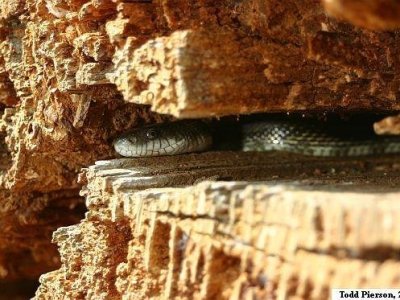 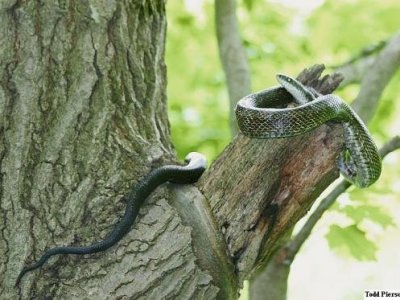 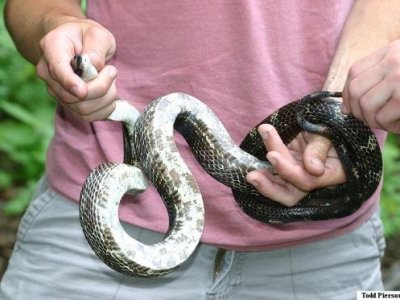 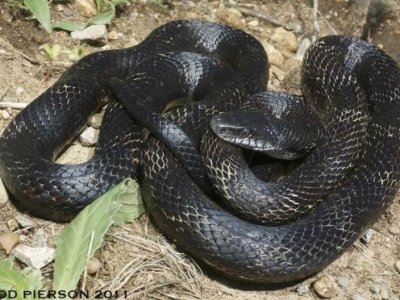 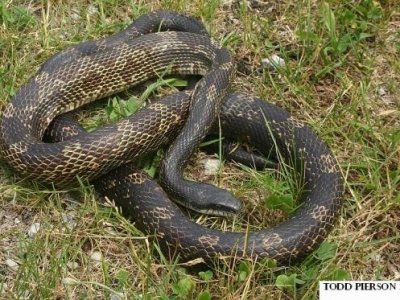 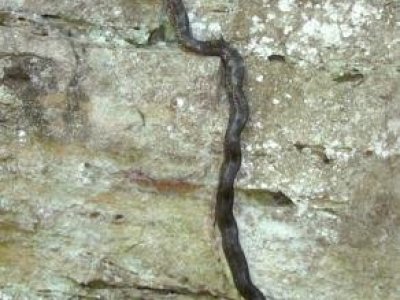 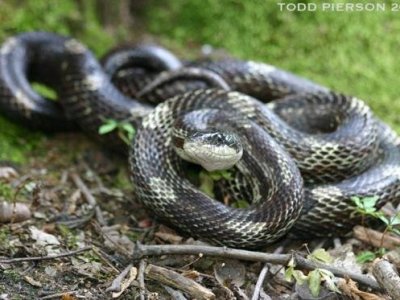 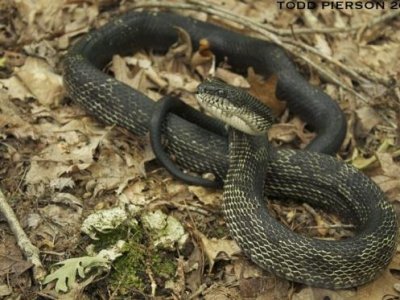 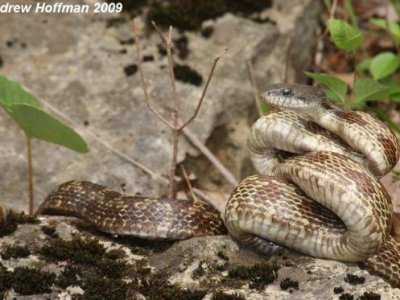 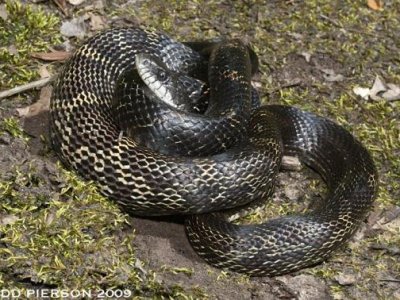 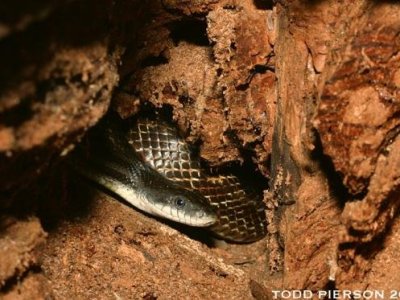