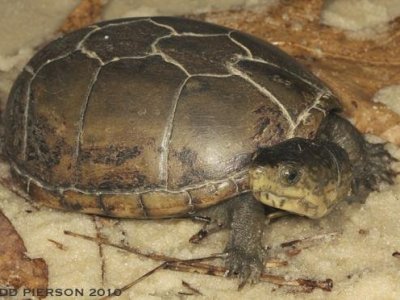 The Eastern Mud Turtle is a small species, with a carapace length averaging 2¾ to 4 in (7 to 10 cm) for adults. The head is irregularly mottled or streaked with yellow. The carapace is domed, yellow to black, and lacks a keel or distinctive pattern. The plastron is yellow to brown and may have varying amounts of dark markings. They are sometimes confused with Stinkpots (also known as Musk Turtles). However, the plastron of the Eastern Mud Turtle differs from that of the Stinkpot in that it is double hinged and has a triangular shaped pectoral scute. Also unlike Stinkpots, they don't have two stripes on the face. They have a relatively small plastron, but unlike Stinkpots, it has two hinges forming a "K" shape (for Kinosternon).

Sexes are similar in size. Males have a longer pre-anal length with the vent posterior to the rim of the carapace. Juvenile Eastern Mud Turtles are darker in color, lack markings on the head, and their plastron is orange to red with a dark center.

Eastern Mud Turtles are semi-aquatic and prefer relatively calm, shallow bodies of water. Wet meadows, ponds, marshes, and drainage ditches are typical habitats. In coastal areas, Eastern Mud Turtles can tolerate brackish water and are found on the edges of tidal marshes and offshore islands. Although they do not bask often, they are much more terrestrial than the Stinkpot and can be observed often on land from spring to fall. Eastern Mud Turtles reach maturity at about 4 to 8 years of ages. Captive individuals have lived up to 38 years. Eastern Mud Turtles are predominately bottom feeders. Their diet consists of a variety of insects, mollusks, tadpoles, crustaceans, carrion, and aquatic vegetation.

The Eastern Mud Turtle is listed as State Endangered in Illinois and Indiana. A variety of animals including raccoons, snakes, weasels, skunks, foxes, and crows eat the eggs or juveniles of this species. Direct human impacts include road kills and habitat destruction.

The Eastern Mud Turtle inhabits slow-moving, shallow waters from Long Island south to Florida, along the Gulf Coast to east-central Texas, and north along the Mississippi Valley to Missouri, southern Illinois, and Indiana. In Indiana, the Eastern Mud Turtle is found in the southwestern part of the state with isolated populations in the northwest.