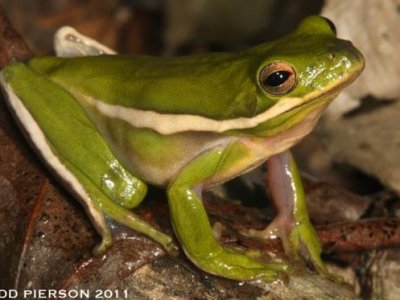 Adults are medium-sized bright green frog with enlarged toe pads and lateral white stripes extending back from the eye. These stripes are sometimes absent or reduced. Green Treefrogs are capable of dramatic color changes from green to dull brown depending on the temperature and background they are on. Dorsal yellow spots are present on some individuals. Green Treefrogs reach an adult length of 1-2 in (20-50 mm) snout-vent length. 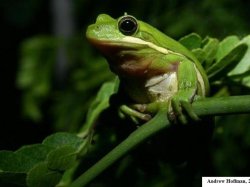 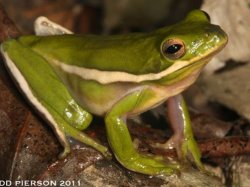 Green Treefrogs deposit 500-1,000 eggs in a firm, gelatinous mass attached to aquatic vegetation at the surface of the water. A medium-sized, greenish tadpole that grows to around 1-2 in (20-50 mm). The tail fin has little pigmentation.

This species is distinctive due to its vibrant coloration and specific habitat needs. However, throughout Indiana many people refer to Gray Treefrogs (Hyla chrysoscelis or versicolor) as Green Treefrogs due to their ability to change color from gray to green. While this color variation can be confusing, both of the other Hyla species in Indiana have lichenate patterning dorsally and have much rougher and more granulated skin (though juveniles are relatively smooth and pattern less). The Cope's Gray Treefrogs (Hyla chrysoscelis) is sympatric (occurs in the same areas) with this species in southwestern Indiana.

Green Treefrogs give a nasal "quank" call that is repeated at irregular intervals.

This is a species of southern swamp land and floodplains that reaches the northern extent of its range in southwestern Indiana. Here, they occur in and around low-lying wetlands dominated by cypress and buttonbush along the Ohio River. During the day, Green Treefrogs can be seen clinging to small trees and bushes near the water's edge or out in the swamp. In southern Illinois, this species seems to be active from March well into October and activity patterns are likely the same in Indiana. Green Treefrogs feed on a variety of invertebrates and are very visual, preying primarily on highly active, flying insects. 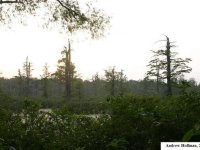 In Indiana, this frog breeds in large, semi-permanent cypress swamps and sloughs. These wetlands are generally semi-permanent and experience some degree of annual drying. Green Treefrogs are summer breeders with most breeding taking place during May and early June with continued calling through July in Indiana. Eggs hatch within days of being deposited and the larval stage may last one to two months with frogs that have just completed metamorphosis coming out in late summer and fall.

Green Treefrogs were only recently discovered in the state and, as such, their status is not well known. Since its original discovery in Posey County, other populations have been found to the east and all known populations seem to be healthy. The current level of protection for this species in Indiana is still being decided. Green Treefrogs in Indiana appear to be rapidly expanding their range east and north and may continue to do so, especially with a warming climatic trend.

Green Treefrogs are found throughout the southeastern United States; west to eastern Texas and north along the floodplains of the Mississippi and Ohio Rivers. They occur in southwestern Indiana in cypress-buttonbush swamps along the Ohio River. The recently discovered Indiana population is apparently expanding east and north and may have only recently crossed into the state.

There are no currently recognized subspecies of the Green Treefrog (Hyla cinerea). These frogs are members of the family Hylidae, which is a globally diverse group and is represented by a total of 6-7 species in Indiana. 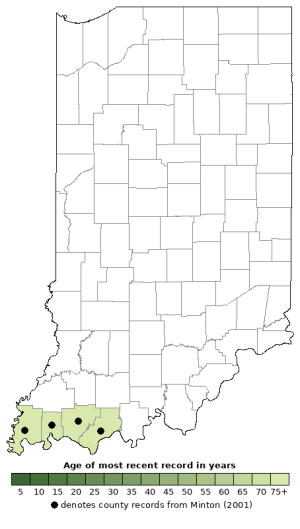 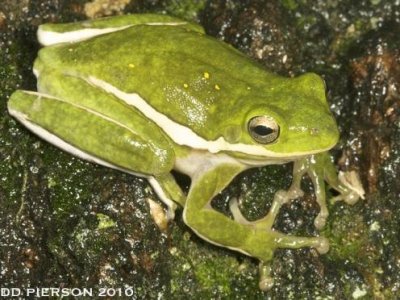 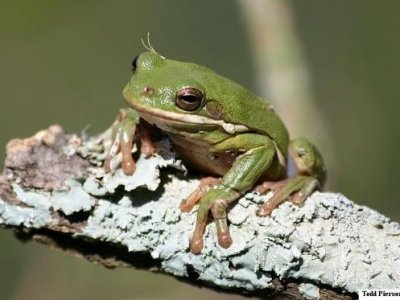 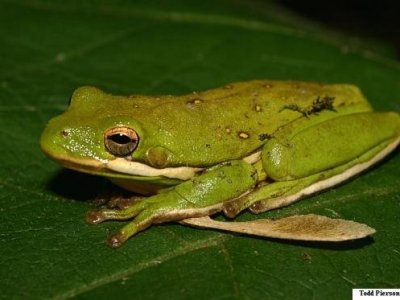 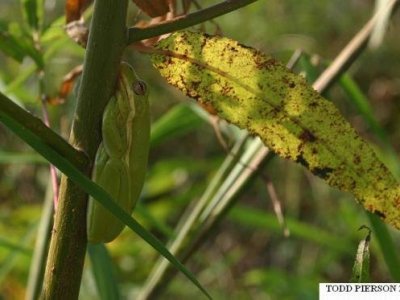