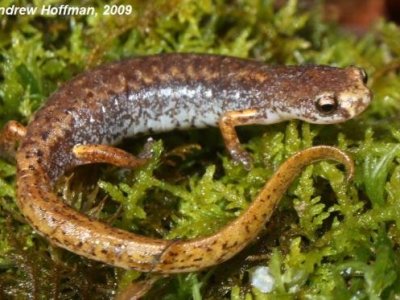 Adult Four-Toed Salamanders are small and slender, with brownish dorsal coloration mottled with black and gold flecks. The underbelly is pure white with distinctive black spots. The snout is noticeably blunt when compared to other salamander species. There is also an obvious constriction at the base of the tail. This salamander gets its name from the four toes on its hind feet (as opposed to five on most salamanders). These are the smallest salamanders in Indiana and adults are usually under 3 in (30-40 mm) in total length.

Females deposit small clusters of eggs (usually in moss or sedge) numbering 15-50 eggs. Four-Toed Salamanders have pond-type larvae with a relatively tall dorsal fin. Larvae are very small (10-20 mm) and are a dull yellow-brown color (Petranka 1998). They have some dorsal mottling and a light median stripe with a large dorsal fin that spans most of the body.

No other Indiana salamanders have a white underbelly marked with large black spots; although young salamanders of other species may be similar at first glance.

Four-Toed Salamanders are usually found in mature woodlands, but the quality of available micro-habitat for breeding may be more important. In northern Indiana, these salamanders are associated with bogs, marshes, and depressional swamps while in southern Indiana this species is found mainly in upland flatwoods and in the vicinity of permanent mossy seep springs. The remaining central Indiana populations are found in association with isolated pools and depressional wetlands where mosses are prevalent. In Indiana, Four-Toed Salamanders are rarely found above ground outside of the breeding season. In the northern parts of its range, this species seems to remain active above ground for much of the year and can be found under logs and leaf litter in forests. Little is known about the dietary habits of this species, but in New York, various small invertebrates including beetles, spiders, and mites were eaten. 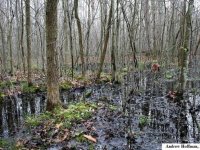 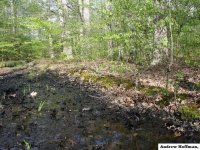 Four-Toed Salamanders typically breed in ephemeral pools or wetlands lined with thick mosses or sedges. They may also utilize permanent spring-fed shallow marshes and seep springs, but thick moss is usually present. These salamanders deposit their eggs within moss that overhangs the water and upon hatching, the larvae wriggle down through the moss to the water below. Females almost always remain with the eggs to offer protection against desiccation and predation, though this species does not appear to aggressively deter predators that invade the nest. There is also evidence to suggest that anti-fungal bacteria on the skin of attending females may keep fungal infections of the eggs and embryos suppressed. Females do not breed every year and will skip years when their body condition is poor in order to recover from the physiological stress of laying and brooding eggs. The species of moss used by this salamander can vary quite a bit, although Thuidium delicatulum seems to be a preferred moss with various species of Sphagnum spp. commonly used as well. In some cases, females may even lay their eggs within sedge clumps, leaf litter, or rotten logs that overhang a water source. In southern Indiana, gravid Four-Toed Salamanders can be found under cover during early March as they seek nesting sites. Females may be found guarding nests from mid-March to early May. Eggs may take up to two months to hatch, and the larval period is abbreviated, with larval development lasting little more than a month. Lab studies have shown that the larvae actually begin metamorphosis directly after hatching, which is likely an adaptation to avoid aquatic predators or escape a rapidly drying pool. Northern Indiana populations likely have a slightly later breeding season, but most females with eggs are found during April.

Formerly, this species was listed as State Endangered. However, following extensive survey work by Casebere and Lodato (2011), Four-Toed Salamanders were found at numerous new sites and counties, with some apparently stable populations in northwestern and southeastern Indiana. For this reason, Four-Toed Salamanders have now been down-listed to Species of Special Concern. Despite their occurrence at numerous sites throughout the state, this species is still relatively localized and care should be taken to avoid disturbances that might affect populations or the habitat they occupy.

This species is found throughout much of the eastern United States, but its distribution is highly fragmented. This is due to its dependence on moist, cool, climates that provide adequate habitat for the mosses that this salamander is largely reliant on. These climates are patchy and isolated throughout much of the southern and western parts of this species range, but are much more common in the north. Still, it is possible that the apparently fragmented nature of Four-Toed Salamanders distribution is a product of cryptic behavior and incomplete sampling by herpetologists.

Four-Toed Salamanders likely occur throughout most of Indiana with the exception of the sand prairies to the northwest and the bottomland swamps in the southwest. Records for this species are widely scattered and they appear to be limited in their distribution mainly by their breeding requirements. Numerous populations have been found in the northern part of the state where wet flatwoods and depressional swamps are common. Populations also appear to be stable in southeastern Indiana where swampy upland flatwoods persist. Due to the degree of deforestation in the till plain region, this species is now rare and isolated throughout much of central Indiana. Populations also appear to be somewhat few and far between in the southern Indiana hills, where they are often associated with mossy seep springs. Recent surveys by Casebere and Lodato (2011) have added many new breeding sites and county records for this species and verified their existence at historical sites. It is likely that future survey work will result in the discovery of even more new localities for this secretive species.

Four-Toed Salamanders (Hemidactylium scutatum) have no recognized subspecies. They belong to the family Plethodontidae, which is the world's most diverse family of salamanders.

Casebere, L. A. and M. J. Lodato. 2011. The Four-toed Salamander (Hemidactylium scutatum) in Indiana: Past and Present. Proceedings of the Indiana Academy of Science 119:111-129. 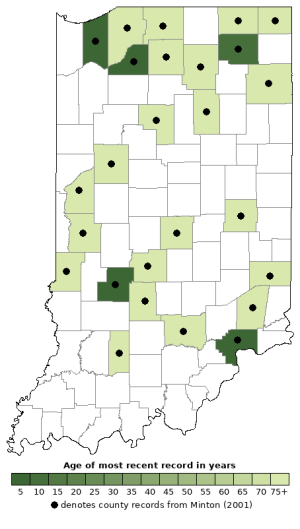 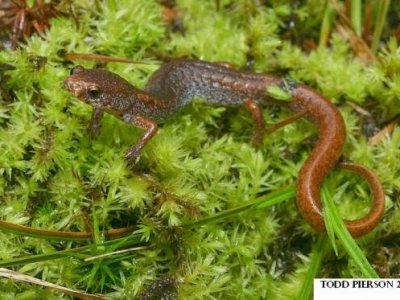 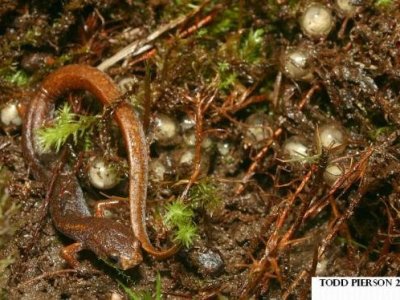 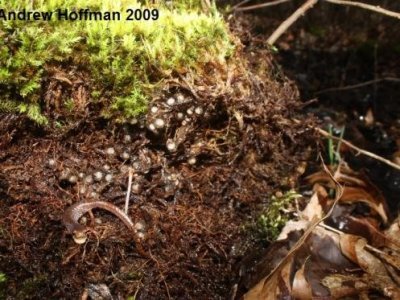 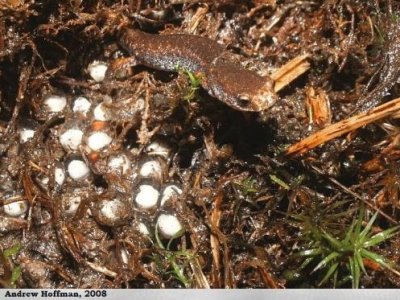 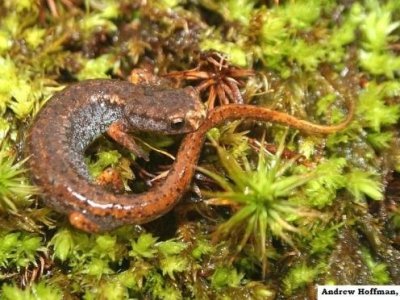 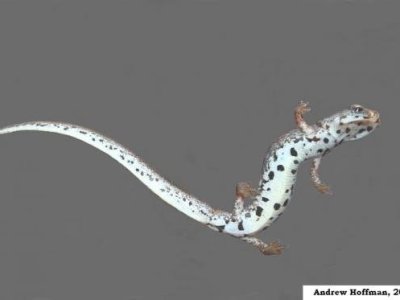 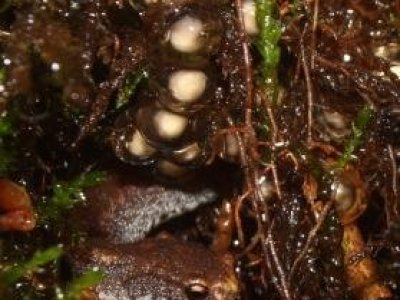 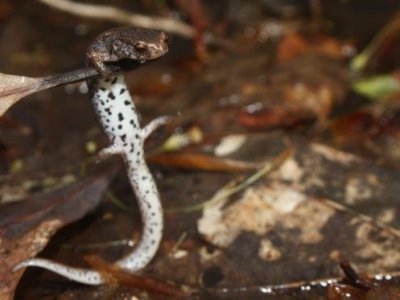 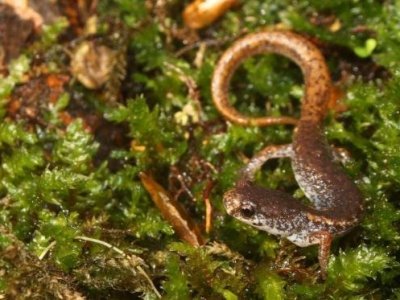 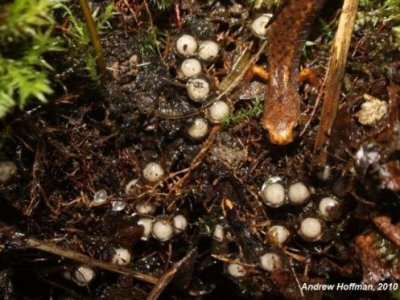 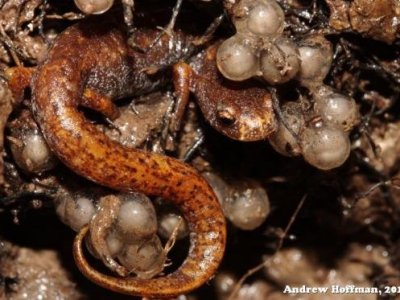 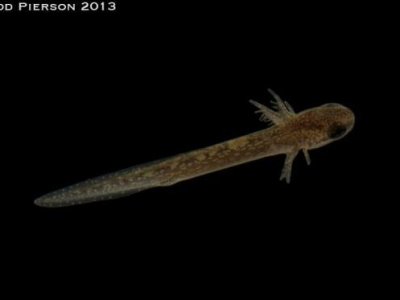 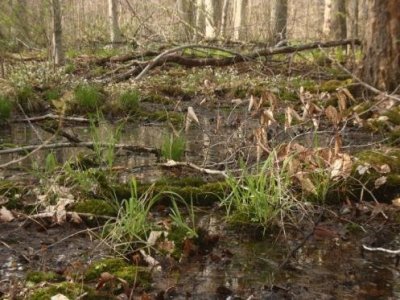