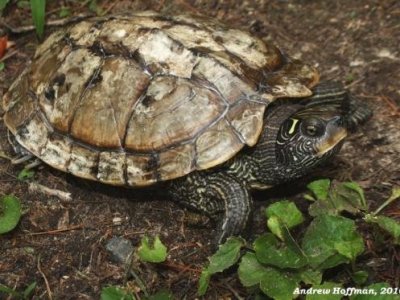 Also known as a “sawback” turtle, this species’ carapace features a row of low spines, and is serrated on the rim. The carapace is olive to brown in coloration with light yellowish markings with dark borders. The plastron color varies from cream to yellow and is patterned with dark lines along the seams in juveniles. The body color of the False Map Turtle is grayish brown to blackish and is marked with light brown, yellow, or whitish stripes. The eye can be light yellow, white or green and is crossed with a dark bar. Narrow hooked marks behind the eye fuse with dorsal lines on the head and neck. There are also small light colored spots below the eye and on the chin. 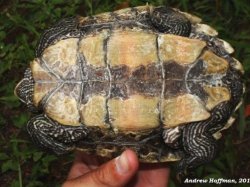 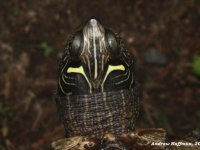 The False Map Turtle is a strong swimmer and prefers rivers and large creeks with moderate currents, containing aquatic vegetation, as well as snags or floating logs. They are also comfortable in deep and swift water. The turtles are present in oxbow lakes and sloughs, but are absent from lakes, ponds, or small streams. Basking is an important to the sawbacks, and they may even be found on steep, slippery snags.

A variety of threats face this species, including the destruction of nests by animals and insects, falling victim to gill nets, as well as being shot. False Map Turtles, much like Red-eared Sliders, have also been collected for the pet trade.

The False Map Turtle lives in large streams of the Missouri and Mississippi river systems; ranging from Ohio, Indiana, Illinois, Wisconsin, Minnesota, through the Dakotas southward to southwestern Alabama, south and west Mississippi, through Louisiana and eastern Texas. In the Midwest, the False Map Turtle is a species of Special Interest in Ohio, and is absent from Michigan. 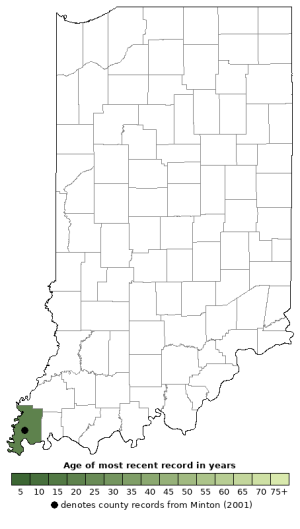