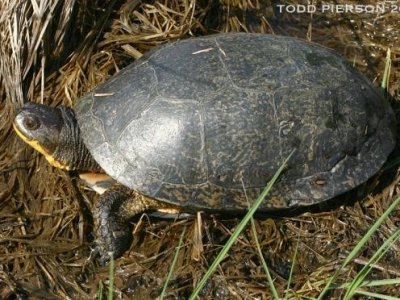 The Blanding’s Turtle is a medium-sized turtle best identified by its bright yellow chin and throat. Its dark olive to black carapace is highly domed, distinctly oval, smooth, and marked with irregular pale yellow spots that may run together forming irregular streaks. This pattern may be faded or absent on older specimens. The plastron has a movable hinge between the abdominal and pectoral scutes, allowing individuals to close the front of their shell much like box turtles. The plastron is yellow with dark blotches on the outer edge of each major plastral scute, but may be almost entirely black in some specimens. The head is flattened on top and the neck is relatively long.

In young Blanding’s Turtles, the carapace is keeled, the chin is yellow, and the plastral scutes are yellow with a central dark blotch. Sexes are similar in size. Carapace length in adults averages 6.5 to 8 in (16.5 to 20 cm). Males have a slightly concave plastron, dark markings on the upper jaw, and a longer preanal length with the vent posterior to the rim of the carapace. Females have unmarked upper jaws, a flat plastron, and a shorter preanal length with the vent anterior to the rim of the carapace. 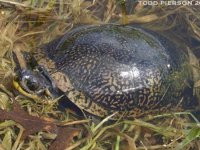 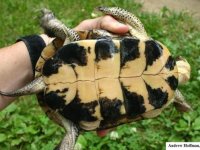 Blanding’s Turtles can possibly be confused with Spotted Turtles; however, the later has fewer, more separated, and larger spots. It also has no plastral hinge.

Blanding’s Turtles inhabit wetlands characterized by clean shallow water, soft bottoms, and abundant aquatic vegetation. Typical habitats include marshes, creeks, wet prairies, sloughs and fens, and the edges of lakes and ponds. Blanding’s Turtles regularly travel across land to access other wetlands. Females may also travel as far as a kilometer away from wetlands to nest. They are active mostly during daylight hours and can often be observed basking on stumps, logs, muskrat lodges, ditch banks, sedge clumps, and cattail mats. During the winter months, Blanding’s Turtles may hibernate underwater, partially buried in the substrate. The feeding period of Blanding’s Turtles is relatively short (4.5 months) compared to other turtles. Crayfish are their primary food item, but they will also feed on insects, fish, frogs, algae, and duckweed. The oldest specimen reported from a natural population was collected from Minnesota in 1988 and was likely at least 77 years old. 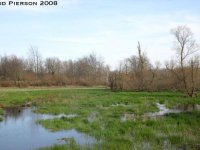 In the Midwest, the Blanding’s Turtle is viewed as imperiled in all of the states in which it is found. It is listed as State Endangered in Indiana and Missouri; State Threatened in Illinois, Iowa, Minnesota, and Wisconsin; and is a species of Special Concern in Michigan and Ohio. Fragmentation and loss of wetland habitats has led to population declines across much of the Blanding’s Turtle’s range. Adults moving between wetlands and females seeking nesting sites are vulnerable to road mortality. Conservation and management plans must address sufficient suitable habitat for the adults, extremely shallow systems for the young, and threats to recruitment due to nest losses by predators.

The primary range of the Blanding’s Turtle extends from southwest Quebec and extreme northwest Pennsylvania, west to Minnesota, and southwest to Nebraska. Isolated populations exist in New York, Nova Scotia, and from southern Maine to Rhode Island.

The Blanding's Turtle (Emydoidea blandingii) has no recognized subspecies. These turtles belong to the family Emydidae, which is represented in Indiana by a total of ten species. 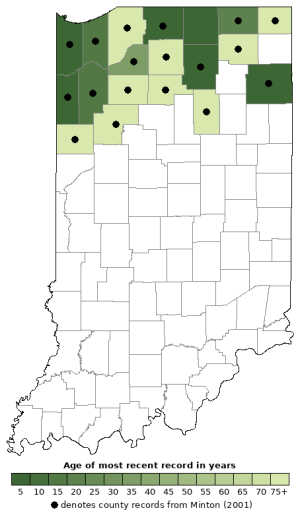 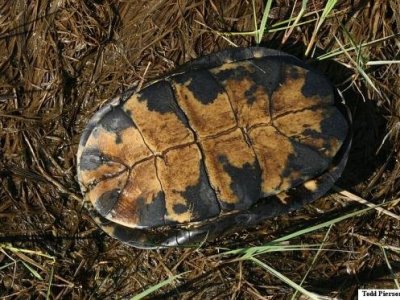 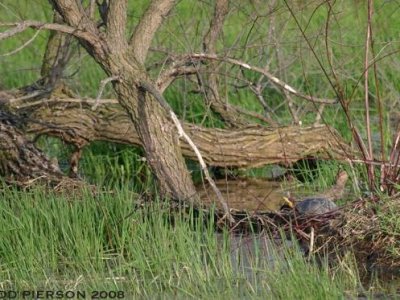 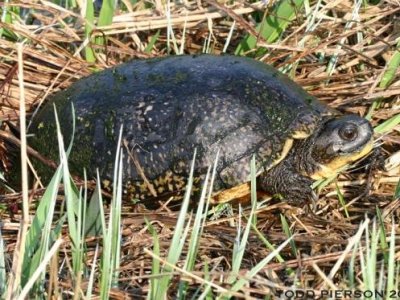