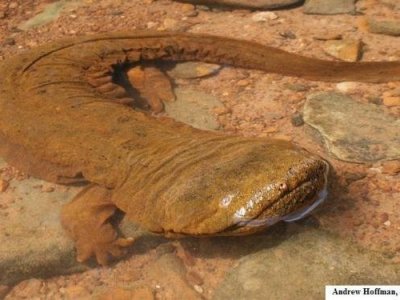 This is a very distinctive salamander due to its fleshy lateral folds, its flattened body shape, and its wide head. The tail is paddle like and heavily keeled. They are generally yellowish brown in coloration but can be darker. Some dark mottling and speckling is usually present dorsally. This is the largest salamander species in North America. It can attain lengths of over 2ft in total body length. 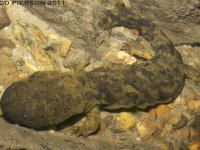 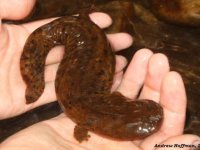 Females lay strands of up to 500 eggs in depressions under flat rocks. Larval Hellbenders are dark dorsally with a lighter venter. They also have external gills which are gradually internalized with age.

The Hellbender can be differentiated from the morphologically similar Mudpuppy (Necturus maculosus), the only other large aquatic salamander in the state, by its lack of external gills and the obvious fleshy lateral folds.

This species is dependent on rocky, clear, clean flowing rivers. Hellbenders are very susceptible to pollution and siltation and as such are in a general decline across their range. They can be seen swimming and actively foraging by night and spend much of the day hiding out under slabs of rocks, logs, and in the deeper sections of the river. Like most wholly aquatic amphibians, Hellbenders are somewhat active year long. They tend to be most active during the spring and fall. Most of the year, Hellbenders are primarily nocturnal. This species feeds mainly on crayfish, but fish and smaller aquatic invertebrates are also taken. Catfish have been known to predate on this species. 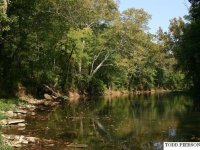 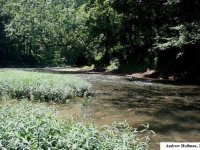 This species begins breeding with the male creating a depression for nesting under a large flat rock or log. The females lay eggs in the nest in strands which are then fertilized by the male. Currently, there is much stipulation as to whether the remaining Indiana populations are still breeding or not as Hellbenders are quite long lived. Very little evidence for breeding has ever been recorded from Indiana, but evidence from other Midwestern states indicates that breeding takes place in late summer or early fall.

Hellbenders are in dramatic decline in Indiana and could potentially become extirpated in the near future. Once found in a number of rivers in southern Indiana, Hellbenders have disappeared from most of their former range. Siltation and pollution are largely responsible for this decline, but disease, reproductive isolation, and accidental take of adults may have hurt populations as well. All salamanders that have been found in recent years have been adults indicating that breeding may not even be taking place, in which case, the hellbender will likely disappear from the state in a matter of years. The IDNR closely monitors the remaining population of Hellbenders in Indiana and plans for a larger scale research project to aid in their conservation and preservation are currently underway. It is illegal to search for and capture this species in Indiana without a permit. The population is very fragile and any unnecessary disturbances to their habitat (such as accidentally breaking the rocks they use for cover or accidentally squishing the adults under their rocks) could have a negative impact on the remaining animals. The Hellbenders is listed as state endangered in Indiana.

Hellbenders are found throughout much of the Appalachians and west into Ohio, Kentucky, and southern Indiana. Hellbenders are also found in Ozark Streams in parts of Missouri and Arkansas. Hellbenders once occurred in a number of rivers in southern Indiana, but have since declined. Historic records are for the Whitewater River from Franklin County-south, the Wabash from Vigo County-south, the Ohio River and many of its larger, rocky tributaries. They are now only known from portions of the Blue River and its tributaries. The health and stability of this population is questionable as few nests and no juveniles have ever been found. 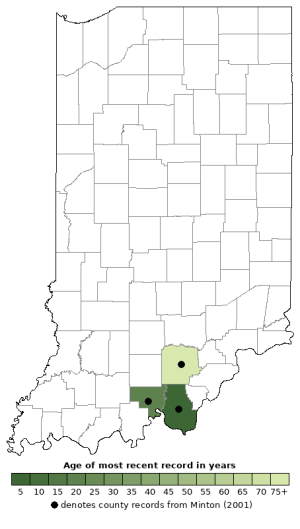 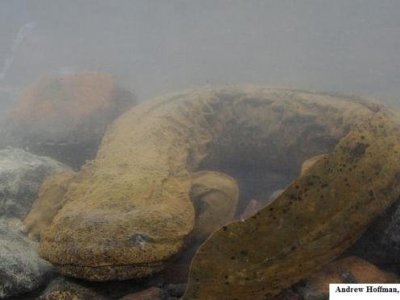 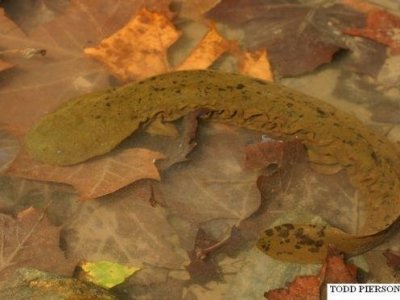 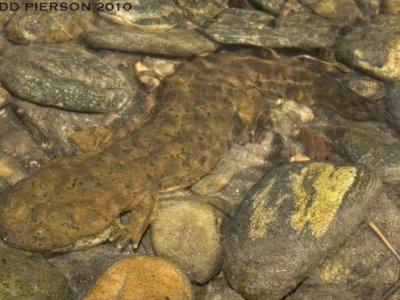 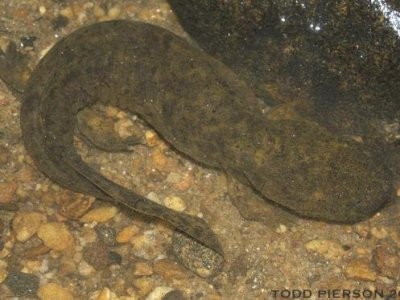