This is the largest terrestrial salamander in the state. It is a chunky black to dark brown salamander with an irregular pattern of yellow blotches and a lightly mottled ventral coloration. Eastern Tiger Salamanders grow to around 7-10 in total length, with some individuals reaching lengths of around a foot. Eggs are deposited in groups of up to 50 as globular clumps and attached to sticks and debris near the bottom of the ponds. Larvae have tall tail fins, bushy external gills, and broad heads.

Eastern Tiger Salamanders are found in a variety of habitats, including flooded fields and marshy woodlands, but they seem to avoid hilly terrain. In Indiana, they have been found in open grasslands, low marshes, mature well-drained forests, agricultural land, and even in suburban and urban areas where they occasionally turn up in window wells. Like other salamanders of the family Ambystomatidae, they are rarely encountered outside of their short reproductive season. This species presumably feeds largely on terrestrial invertebrates, but has been known to take frogs, snakes, and other small vertebrates in captivity. 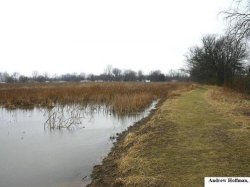 In Indiana, Eastern Tiger Salamanders breed in a variety of wetlands, including permanent ponds with fish and ephemeral ponds without fish. They will even utilize cattle ponds in agricultural areas and retention ponds in suburban areas. They appear less likely to breed in shallow, heavily-forested ephemeral pools like many other species of the family Ambystomatidae (i.e., ambystomatids) will do. Eastern Tiger Salamanders are among the first ambystomatids to move during the winter and spring breeding season; warm days in January and February will generally spark movements in southern Indiana, while March is the start of the breeding season further north. Eggs are usually laid during February or March, and adults leave the pond after breeding. Eggs hatch after approximately one month (Minton 2001). The larvae typically metamorphose in early-mid summer, but there is some evidence of paedomorphosis (i.e., sexual maturation without metamorphosis) in some parts of Indiana. Easter Tiger Salamanders adults are occasionally encountered during the summer and fall, but they are only reliably found during the breeding season. There may be a small peak of activity during the fall, when they can sometimes be seen crossing roads during rains.

Although the distribution of Eastern Tiger Salamanders in Indiana is quite patchy and seemingly unpredictable, this species is abundant where it occurs. They tend to be the dominant salamander species in wetland communities in which they breed and may outcompete other ambystomatids, and they are somewhat tolerant of habitat degradation and predatory fish.

The tiger salamander species complex is one of the most widespread groups in North America; in the United States, populations reach as far west as Washington, as far south as southern Texas, as far east as the Carolinas, and north through many of the Great Lakes states. Eastern Tiger Salamanders are found throughout Indiana, but are largely absent from the unglaciated hills of south-central Indiana, the Switzerland Hills of southeastern Indiana, and the bottomland forests and swamps of southwestern Indiana. 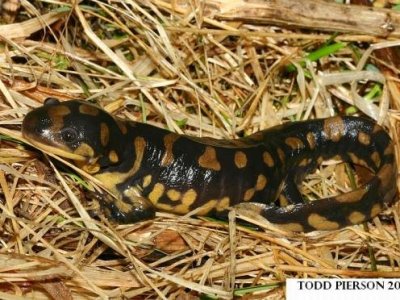