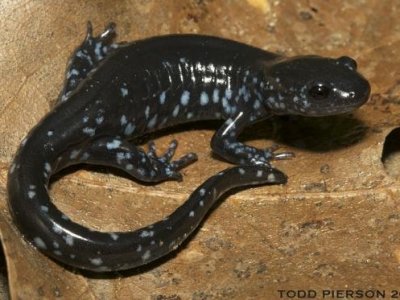 These are dark salamanders with lateral and (often) dorsal blue spotting that diminishes with age. This species is smaller than other species of the family Ambystomatidae in Indiana. Adults reach total lengths of 4-6 inches (10-15 cm). Blue-Spotted Salamanders deposit eggs individually or in relatively obscure, small clumps attached to aquatic vegetation and debris. They have pond-type larvae with a tall dorsal tail fin and bushy external gills. Larvae are dark brown and often have an indistinct yellow or tan stripe on each side of the body. They have mostly plain bellies (Petranka 1998).

The Jefferson's Salamander (Ambystoma jeffersonianum) is very similar in appearance but has fewer blue spots overall. The snout and toes of the Jefferson's Salamander are more elongated than those of this species, and it tends to have a longer, more keeled tail. The Small-Mouthed Salamander (Ambystoma texanum) is somewhat similar in appearance to this species, but it has a shorter snout and is generally more robust with a more lichenate pattern dorsally. Most confusingly, all known representatives of the lineage of unisexual Ambsytoma contain genomic material from Blue-Spotted Salamanders can be difficult to differentiate morphologically. These unisexual Ambystoma are most common in northern and central Indiana.

Blue-Spotted Salamanders, like most of the other members of the family Ambystomatidae, are ephemeral pond specialists. These salamanders are most frequently found in and around wooded, shaded temporary ponds during the breeding season, and adults can be found under logs in the surrounding forest outside of the reproductive season. They tend to favor sandy, wet woodlands, but may also be found in well-drained forests where seasonal pools are available. Blue-Spotted Salamanders are most likely to be surface active during their spring breeding season but can be found under logs and other cover throughout the summer and fall when conditions are mild. This species is more likely to be found outside of its breeding season than are other salamanders in the genus. Larval Blue-Spotted Salamanders feed on small aquatic invertebrates while adults feed on a variety of terrestrial invertebrates. 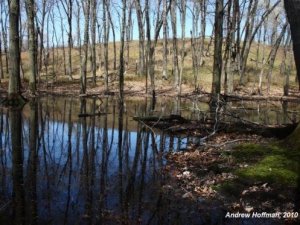 Reproduction occurs when snow begins to melt and rains begin to fall, and the Blue-Spotted Salamander is one of the earliest-breeding members of the family Ambystomatidae. They typically breed from late February to late April. Minton (2001) reports eggs hatching in late April and Smith (1961) reports metamorphosis from June-August in Illinois.

Although populations of this species are few and scattered in Indiana, they are abundant where they are found and are presumably stable. Due to its limited range in the state, the Blue-spotted Salamander is considered a Species of Special Concern in Indiana.

Blue-Spotted Salamanders are found throughout the Great Lakes and into Canada, with populations in Wisconsin and Minnesota stretching eastward into the northeastern states and all the way into Maine. They are restricted to the northernmost portion of Indiana, although there is one record further south in Jay County. However, morphological similarity to unisexual Ambystoma makes the definitive documentation of Blue-Spotted Salamanders difficult with genetic confirmation.

There are no recognized subspecies of the Blue-Spotted Salamander. It belongs to the family Ambystomatidae, which is represented in Indiana by eight species (plus the unisexual Ambystoma)--the most of any state!

Smith, P. W. 1961. The amphibians and reptiles of Illinois. Bulletin of the Illinois Natural History Survey 28:1-298. 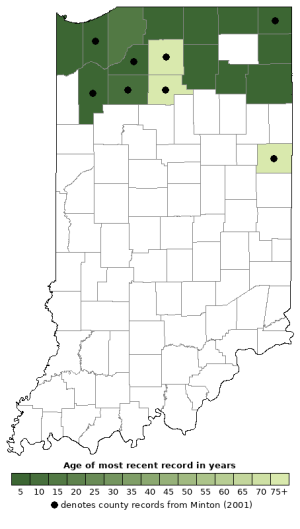 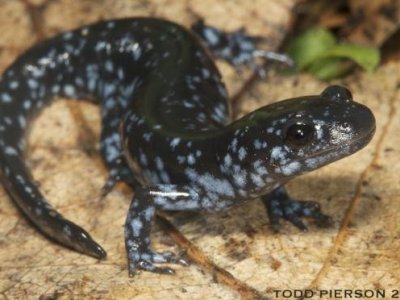 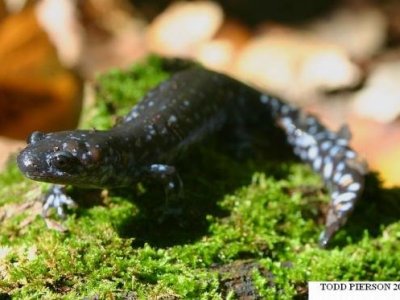 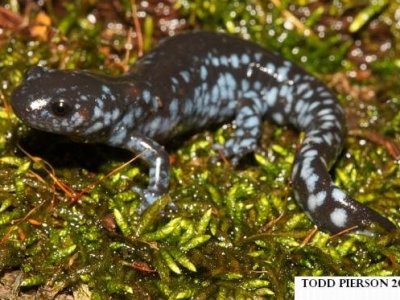